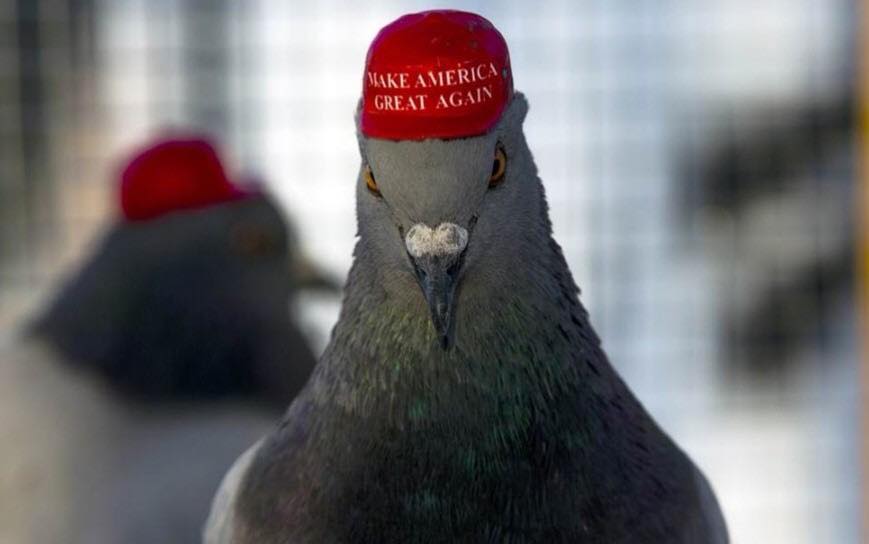 With the US elections just around the corner, political groups are taking their opinions too far by using animals in acts of cruelty. The shadowy Pigeons United To Interfere Now (P.U.T.I.N.) group has claimed responsibility for the pigeons found in Las Vegas with “MAGA” hats glued to their heads.

The group released a statement with NBC News explaining how they wanted to mock the US president in what many are calling an act of animal cruelty.

The statement from the group read:

“P.U.T.I.N. have used their pigeons to launch a one of a kind aerial protest piece in response to the arrival of the 2020 Democratic Presidential hopefuls. The release date was also coordinated to serve as a gesture of support and loyalty to President Trump. Most have returned. We expect to see the rest tonight or tomorrow.”

You see the red thing on that pigeon’s head? It’s a “Make America Great Again” hat. A group released a flock of them downtown Las Vegas on the eve of the Democratic Debate. @News3LV pic.twitter.com/xtCyd2rA96

The statement continued to say that they released 25 pigeons in total, with one of them wearing a Trump-like wig while the others sported MAGA hats.

The Las Vegas pigeon rescue organization Lofty Hopes said they were attempting to rescue the pigeons.

P.U.T.I.N. defended the animal cruelty stunt, saying they attached the hats with eyelash glue and would wear off. Mariah Hillman, who runs Lofty Hopes disagreed.

“It doesn’t matter what kind of glue it is. It is still, in fact, cruelty, because you are impairing their vision. There’s not always a guarantee that they’ll return, because they can get injured or killed before that happens,” Hillman explained.

Hillman’s group will attempt to rehabilitate what pigeons they rescue, and noted a similar stunt occurring in December.

“It started here with the press making fun of it, the police didn’t do anything about it, and now it’s grown into this, so when is it going to stop, and who’s going to do something about it?” Hillman said.