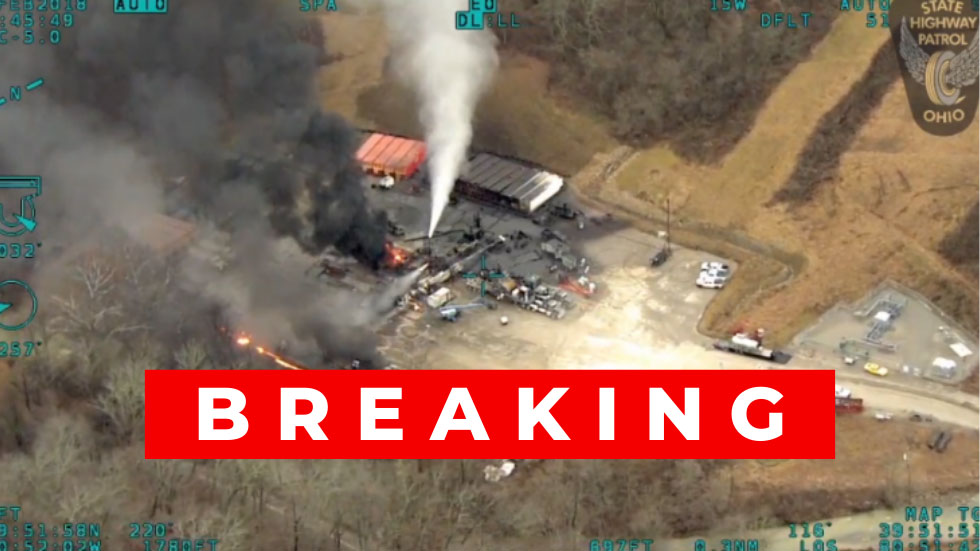 The revelation Monday that a blowout last year at an Ohio natural gas well owned by an ExxonMobil subsidiary was one of the country’s largest-ever leaks of the potent greenhouse gas methane provoked impassioned calls for a rapid, just transition to 100% renewable energy nationwide.

“The next time some paid liar in the fossil fuel industry insists fracked gas is helping solve the climate crisis, remind them that a single Exxon fracking site ‘leaked more methane in 20 days than all but three European nations emit over an entire year,’” tweeted David Sirota.

Sirota quoted The Washington Post‘s report on the findings of a study published Monday in the Proceedings of the National Academy of Sciences. A team of American and Dutch scientists studied satellite data and found that the Feb. 15, 2018 blowout at a Belmont County well—which was hydraulically fractured or fracked before the incident—resulted in an “extreme” leakage of methane.

“A little known gas-well accident at an Ohio fracking site was in fact one of the largest methane leaks ever recorded in the U.S.”

“Released more methane than the reported emissions of the oil & gas industries of countries like Norway & France.”@NYTimes https://t.co/XBl02hlEyY pic.twitter.com/AXJ9RwfOoI

The team of 15 scientists explained that “from these data, we derive a methane emission rate of 120 ± 32 metric tons per hour. This hourly emission rate is twice that of the widely reported Aliso Canyon event in California in 2015.” The incident in California, which lasted four months, is the largest known accidental methane leak in the United States. Methane is 84–87 times more potent than carbon dioxide over a 20-year period.

“The Ohio episode triggered about 100 residents within a one-mile radius to evacuate their homes while workers scrambled to plug the well,” The New York Times reported Monday. “At the time, the Exxon subsidiary, XTO Energy, said it could not immediately determine how much gas had leaked.”

Critics of continuing fossil fuel production pointed to new findings about the blowout and its consequences as evidence of the dangers of using natural gas as a “bridge” in a national—and global—transition to 100% clean energy.

Author and activist Naomi Klein tweeted a link to the “terrifying” Times report and highlighted commentary from a scientist at the U.S.-based nonprofit advocacy group Environmental Defense Fund (EDF).

Terrifying story about a blowout in Ohio that released "as much methane as the entire oil and gas industries of some nations release in a year." EDF – which has aggressively pushed NatGas as a "bridge fuel" – explains that this could be happening every day https://t.co/ghGT74IjBx

“Right now, you have one-off reports, but we have no estimate globally of how frequently these things happen,” Steven Hamburg, EDF’s chief scientist and a co-author of the new study told the Times. “Is this a once a year kind of event? Once a week? Once a day? Knowing that will make a big difference in trying to fully understand what the aggregate emissions are from oil and gas.”

Bill McKibben, co-founder of the global environmental advocacy group 350.org—who also shared the Times report on Twitter—concluded that “natural gas [is] clearly a bridge fuel, it’s just that the bridge leads to hell.”

And shows clearly what we knew all along – gas is no less bad than oil and coal.

ExxonMobil, for its part, did not indicate any intention to reconsider fracking or natural gas production in response to the new findings. Julie L. King, a spokesperson for the fossil fuel giant, told the Post by email that “we deeply regret this incident occurred and are committed to identifying and managing risks associated with our activities to prevent recurrence.”

“We are eager to learn more about their study,” King added. “ExxonMobil is working with government laboratories, universities, NGOs, and other industry participants to identify the most cost-effective and best-performing technology, including satellites, that can be adopted by all producers to detect, repair, and accurately measure methane.”