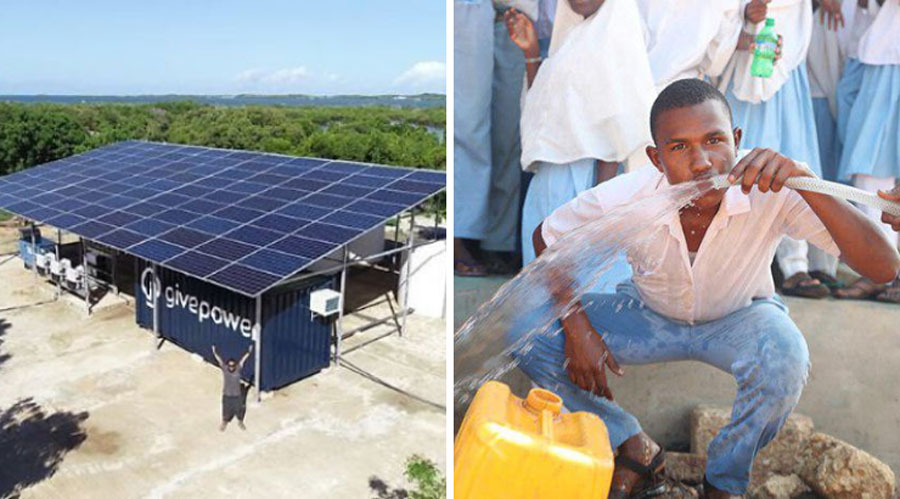 However, according to World Health Organization estimations, 2.2 billion people still struggle to access fresh drinking water every day, around 29 percent of the global population. Of those who don’t have access to clean water, around 485,000 deaths occur each year—deaths that are preventable.

Despite over two-thirds of the Earth’s surface being covered by water, 96 percent of it is undrinkable. In drought-prone nations like sub-Saharan Africa, maintaining surface water for populations is close to an impossible feat. However, the GivePower Foundation has developed an alternative.

The GivePower Foundation has been operating a solar water farm in Kenya since mid-2018. Located on the Kenyan coast along the Indian Ocean, Kiunga now has access to enough clean, drinkable water for 35,000 people every day. Interesting Engineering reports that the small fishing community has seen dramatic improvements to the population since the commencement of the solar-powered desalination plant in August 2018.

The NGO began as a subsidiary of billionaire Elon Musk’s 2006 SolarCity, a solar-panel company, but eventually became independent prior to the SolarCity/Tesla merger in 2016. GivePower now uses a desalination system housed in shipping containers to transform 20,000 gallons of saltwater into drinking water. The containers are fitted with solar panels and high-performance Tesla batteries to operate the water pumps 24/7.

Until the operation of the desalination plant, the 3,500 Kiunga villagers had no access to safe, drinkable water. The ongoing Kenyan droughts over the last five years have also impacted agricultural production and created an extreme malnutrition concern for its population.

According to GivePower, the desalination plant will provide enough clean water for the community over the next 20 years at a cost of $20 per person. Local economies are also experiencing some growth since the implementation.

Prior to the desalination plant, families had to organize days around acquiring fresh water, often travelling for over an hour to find fresh water. Everyday activities such as cooking and bathing in contaminated water also led to a myriad of health problems like dysentery and cholera in the community.

“It was a really dire situation for this community … Children walking around the community with wounds [and] lesions on their body from washing clothes in salt water.”

For Barnard, the NGO’s solar water farm is a viable solution for millions around the world struggling to access clean water.

With our background in off-grid clean energy, GivePower can immediately help by deploying solar water farm solutions to save lives in areas throughout the world that suffer from prolonged water scarcity.”