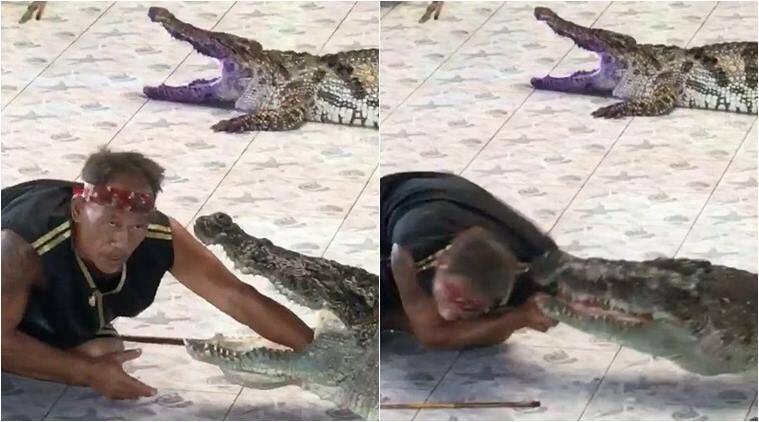 The shocking scene left audience scared and screaming in terror.

The incident took place at famous Phokkathara Crocodile Farm and zoo in Chiang Rai, which is known for its crocodile shows where trainers often put their head and head in the mouth of the reptile to entertain visitors.

In a horrifying moment, a crocodile attacked a trainer at a Thailand zoo, but not without provocation. The incident took place at famous Phokkathara Crocodile Farm and zoo in Chiang Rai, which is known for its crocodiles shows where trainers often put their head and hand in the mouth of the reptile to entertain visitors. The shocking moment happened during one such live shows and the daunting images left the audience, including children scared and screaming.

The jaw-dropping scene was captured by Khun Phusawit, 35, who had been visiting the Phokkathara Crocodile Farm and zoo with wife Nok and two children. The footage showed the zoo-keeper reaching inside the crocodile’s mouth and pushing deeper down its throat. He continues to nudge deeper looking at the audience unsuspecting the impending attack. And within moments, the crocodile is seen closing its jaw and clutching the hands. He managed to get his hands out from its mouth but not without a fight. The bloody scene made the announcer to stop the music, as he is seen rushing off from the arena.

You can watch the video here: [Disclaimer: Graphic video, viewers discretion is advised.]