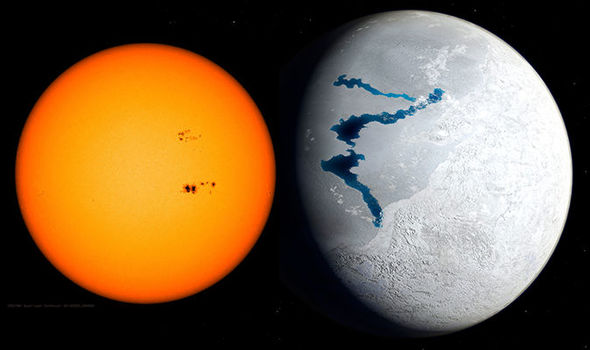 In a chilling warning, NASA predicts that the sun will achieve something called solar minimum by 2022-end or 2023 and when that happens Earth’s host star will release far less heat than it normally does, which means the mercury will plummet in the thermosphere resulting in a prolonged cold snap affecting the weather on the surface of the planet.

In 1645, a solar minimum led to a mini ice age (scientifically known as the Maunder minimum) and left the Earth grappling with freezing weather for 70 years. During these seven decades, temperatures dropped globally by 1.3 degrees Celsius leading to shorter seasons and food shortages.

According to scientists, the sun has been without sunspots for 79 days – or 55% – of the year so far, causing the Earth’s upper atmosphere to lose heat energy, which shows the long-awaited solar minimum has arrived and it could soon shrink the thermosphere – meaning it is going to get very cold, very quickly.

“A cooling trend is obvious in the atmosphere…High above the Earth’s surface, towards the edge of space, the atmosphere is losing heat energy and if current trends persist, it could mean soon to set a Space Age record for cold…the knowledge of this is quite startling to think for a start that something out of our control and visible could cause the next ice age, is not just a little frightening but scary.”

Sunspot activity tends to come and go in cycles lasting around 11 years as the number of patches peaks and drops. But there have been very few spots on the sun for most of this year. Mlynczak explains:

“SABER is currently measuring 33 billion Watts of infrared power from nitric oxide. That’s 10 times smaller than we see during more active phases of the solar cycle.”

During the last solar minimum, the Thames froze over; if it happens again, according to NASA, the solar minimum will enhance the effects of space weather, disrupt communications and navigation, and even cause space junk to ‘hang around’.

Interestingly, when the frightening warning that the Earth could be plunged into ice age if the sun continues to remain dead went viral, Mlynczak issued the following statement to Climate Feedback:

“The cooling effects we are seeing in Earth’s thermosphere are a result of the current solar minimum conditions. The thermosphere is the layer of Earth’s atmosphere beginning 65 miles above Earth’s surface and is highly sensitive to solar activity. There is no relationship between the natural cycle of cooling and warming in the thermosphere and the weather/climate at Earth’s surface.

“NASA and other climate researchers continue to see a warming trend in the troposphere, the layer of atmosphere closest to Earth’s surface. There is no inconsistency between the science findings of a warming troposphere [where we live] and the Thermosphere Climate Index.”