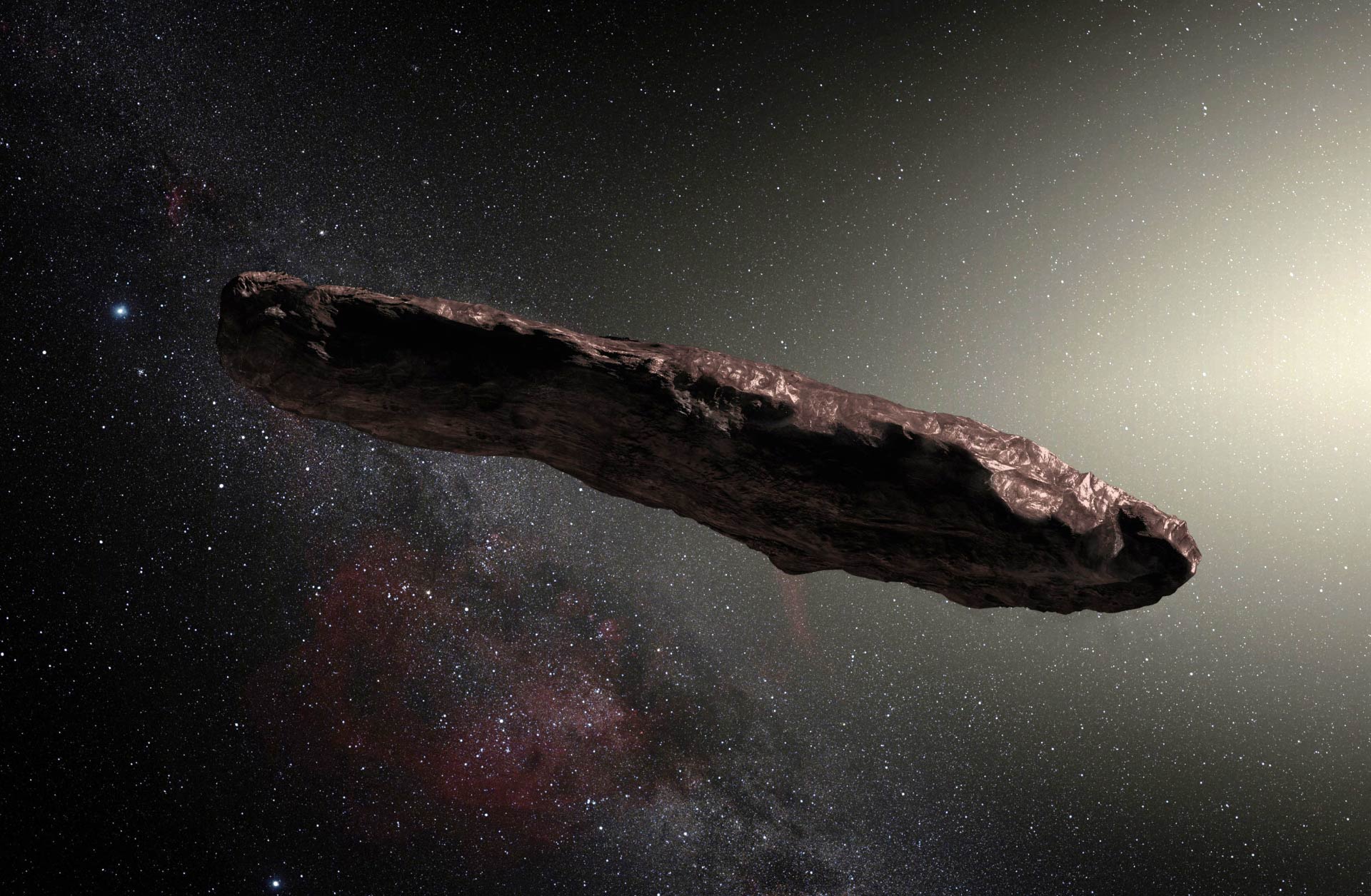 In October 2017, astronomers at the University of Hawaii spotted a bizarre cigar-shaped object some 33 million kilometers from Earth blazing its way through our solar system. It sped past Earth and looped around our Sun at 196,000 mph. The half-a-mile-long object was so unusual that NASA said it had “never seen a natural object with such extreme proportions in the solar system before”.

A combination of this object’s incredible speed and ridiculous inclination revealed that it did not belong to us. Instead, this object was a visitor from some distant, unknown solar system altogether. Astronomers eventually named it ‘Oumuamua, which is a Hawaiian word that roughly translates to “the scout.” By the time we spotted the foreigner, it was already making its way back out to the interstellar depths from which it came.

The scientists called it the first interstellar object to be detected within our solar system, described it as “a red and extremely elongated asteroid”, and named it Oumuamua – the Hawaiian word for “a messenger from the distant past, reaching out to us”. But they had no idea where it came from.

In October 2018, Avi Loeb, the chair of Harvard’s astronomy department, suggested that the object “may be a fully operational probe sent intentionally to Earth’s vicinity by an alien civilization.” Loeb pointed out that light-sails with similar dimensions had been designed and constructed by our own civilization. He referred to projects such as the Japan Aerospace Exploration Agency’s 2010 IKAROS craft, which was the first to successfully demonstrate solar-sail technology in space; and the ongoing Breakthrough Starshot Initiative.

Loeb later suggested that a meteor, which ploughed into our planet in 2014, may have come from outside the solar system. After calculating the meteor’s trajectory before it hit Earth, Loeb believed the rock had a ‘possible origin from the deep interior of a planetary system or a star in the thick disk of the Milky Way galaxy’.

He claimed that millions of similar objects may have hit Earth over the aeons, backing up a theory called panspermia which suggests life is carried through the universe on asteroids which ‘seed’ planets by crashing into them.

Can Oumuamua answer some of the eternal questions surrounding life in our universe?

“We think that something like an Oumuamua … there’s always one within about 1 AU of the sun [One AU, or astronomical unit, is the average Earth-sun distance — about 93 million miles or 150 million kilometers] at any given time. And that actually has some really interesting implications,” planetary scientist Bill Bottke commented in April during a panel discussion at the Breakthrough Discuss conference at the University of California, Berkeley.

One such implication centers on the role that Oumuamua-like objects could play in the transfer of life from world to world around the cosmos, reports Space.com. Oumuamua displayed non-gravitational acceleration as it cruised away from the Sun, prompting speculation that it could be an alien spacecraft. However, it was argued that the mysterious object was icy and its weird movements were caused by comet-like out-gassing.

Karen Meech, astrobiologist and astronomer at the Institute for Astronomy at the University of Hawaii, said during the Breakthrough Discuss panel:

“This tells us that ices can survive over these interstellar distances. Previous research on comets and other small bodies within our own solar system suggests that ‘Oumuamua-like objects provide good thermal insulation and radiation shielding. You’re probably getting significant protection on the inside, and you’re not getting any deeper with the radiation field or heating from supernovae below 10, 20 meters [33 to 66 feet] depth in a body. So, the idea that you could bring some living organism in some state — it could be preserved in a cold deep freeze. So, it would be no different than coming from our outer solar system.”