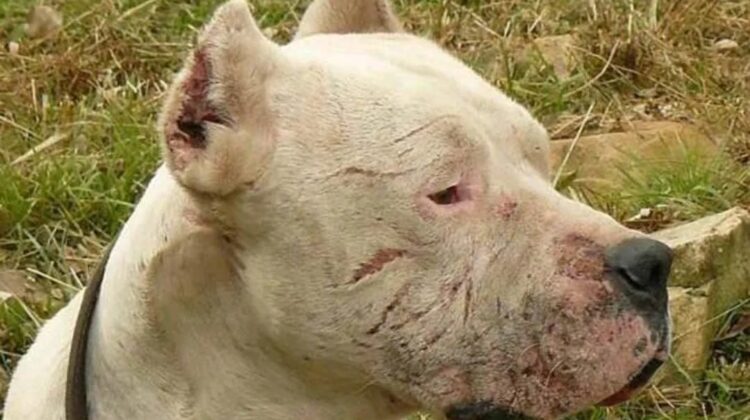 He knew exactly what to do when he heard the girls scream.

When confronted by a puma, the Dogo Argentino chose to give his life to save two small girls.

According to Wikipedia, the Dogo Argentino is a giant white, muscular dog that was bred in Argentina for big game hunting.

They had a reputation for going on wild boar hunts. Dogo Argentinos are also bred to protect their human companions. That’s why Morocho probably had an easier time taking down a puma.

Antonio Nores Martinez was the first to breed Dogo Argentinos.

His grandson took over from there. Dr. Ulises D’Andrea Nores would visit the breeding facility on a regular basis to ensure that his grandfather’s work was continuing. “I feel quite safe when I have Dogos in my house,” said Ulise’s wife, Carolina Cappalletti.

In 2008, Nores’ family was spending the day on their property with some friends when Morocho demonstrated how effective Grandpa’s legacy had been.

Sofie Cappaletti and her friend’s daughter Yoli were playing in the vicinity of their favorite fig tree, where they enjoy gathering figs.

Yoli climbed to the highest branch she could find, knowing that the best figs are usually found at the very top of the tree.

There was only one problem. She hadn’t been the only one to scale that tree.

But it was too late by the time Yoli reached the top of the tree.

She had no idea a puma, also known as a mountain lion or cougar, was hiding in the same tree with her.

“I was terrified when I saw the puma,” she admitted to us. “When Yoli was about 7 feet above the ground, she began hearing noises on the tree, such as branches tweaking and leaves moving. “She looked up and saw a BIG puma jumping down the upper branches,” explains dogo4u.blogspot.

“The beast struck the child with a paw, and Yoli fell from a height of two meters, landing flat on her back.”

Fortunately, Yoli and Sophie were able to leap to their feet and begin running, but the puma was close behind.

The puma is one of South America’s largest predators, weighing up to 180 pounds. Fortunately, Morocho, who weighs 90 pounds, jumped in to defend the girls.

He wasted no time in pursuing and fighting the puma. When Yoli’s father heard the girls screaming, he ran as fast as he could.

“I thought it was a snake,” said Tomas Bracamonte. “I raced in. I dashed over to them as fast as I could.”

He discovered Morocho when he arrived. The dog had been badly injured but was still alive. The puma, on the other hand, had passed away. Morocho was dragged back to the property by Bracamonte. The girls’ relatives were overjoyed that Morocho had saved them.

“We’d be hurt if it wasn’t for Morocho,” the girls admitted.

Morocho was rehabilitated over the course of ten days. “After that incident, Morcho became a hero here,” Cappaletti observed. “Morocho is special in our hearts because he protects us.”

Because of Morocho, those two tiny children are still alive today. Morocho’s valiant effort astounded millions of people all over the world. On YouTube, the film about Morocho’s story has been viewed by over 2.5 million people. The video is embedded below.