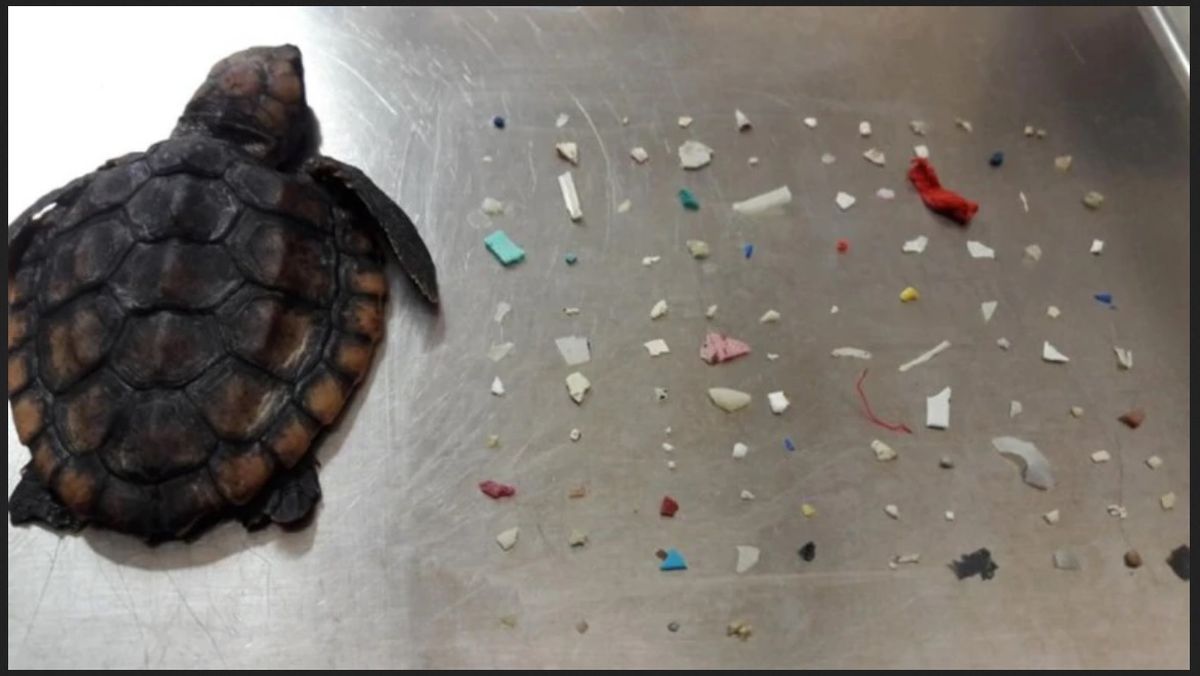 In a heart-breaking news, a few weeks old loggerhead sea turtle, which washed ashore near the Boca Rotan coast, Florida, died shortly after conservationists found that the baby turtle, which would fit in the palm of your hand, had 104 pieces of plastic in its intestinal tract that it swallowed while swimming in the ocean.

“The nesting season for sea turtles runs from March to October in South Florida. Since the start of the season, the nature center has seen about 100 washbacks, dozens of which have died. All of the baby turtles that died had plastic in its intestines and gut. When they come back to shore, it means something’s wrong. Biologists and volunteers attempt to help them by giving them fluid to pass the plastic. Sometimes the plastic will remain in their stomachs, causing the turtles to feel full and stop eating.”

A heart-breaking photo shared on by the center on its Facebook page shows the dead tiny turtle next to the 104 pieces of plastic – from bottle labels to balloons – that were removed during its necropsy.

Not such a happy #TurtleTuesday this week. It's washback season at Gumbo Limbo and weak, tiny turtles are washing up…

Emily Mirowski, a sea turtle rehabilitation assistant at the center, who examined and dissected the turtle before it died told CNN:

“It was weak and emaciated. I could just tell it wasn’t doing well. It was really heart-breaking … But it’s something we’ve seen for several years and we’re just glad people are finally seeing this image and hopefully it’s raising awareness.”

According to the conservationists, dozens of washbacks (turtles that have made it to the ocean and the Gulf Stream for a few weeks before being washed back ashore) dropped off at the center have already died since washback season started: sadly, every single one of those turtles had swallowed plastic.

“The issue is that with all the plastic in the oceans, that’s where the plastic sticks. All the microplastics stick to the seaweed, and it looks like food to the baby turtles. Having plastic in their bellies gives turtles the feeling that they’re full. As a result, they don’t eat or receive the proper nutrition they need to survive.

“By the time the turtles are found and dropped off at the center, they’re weak and emaciated. We give them a small amount of fluids every day to get them hydrated. Then we hope they’ll pass the plastic naturally. The important thing is getting them hydrated to get their appetite back.”

The incident highlights the toll that plastic pollution, especially microplastics (fragments of plastic that are smaller than 5 mm in length) takes on the environment and wildlife.

Remember: Every piece of plastic that’s ever been made is still out there. It never goes away, it just breaks down to smaller pieces.