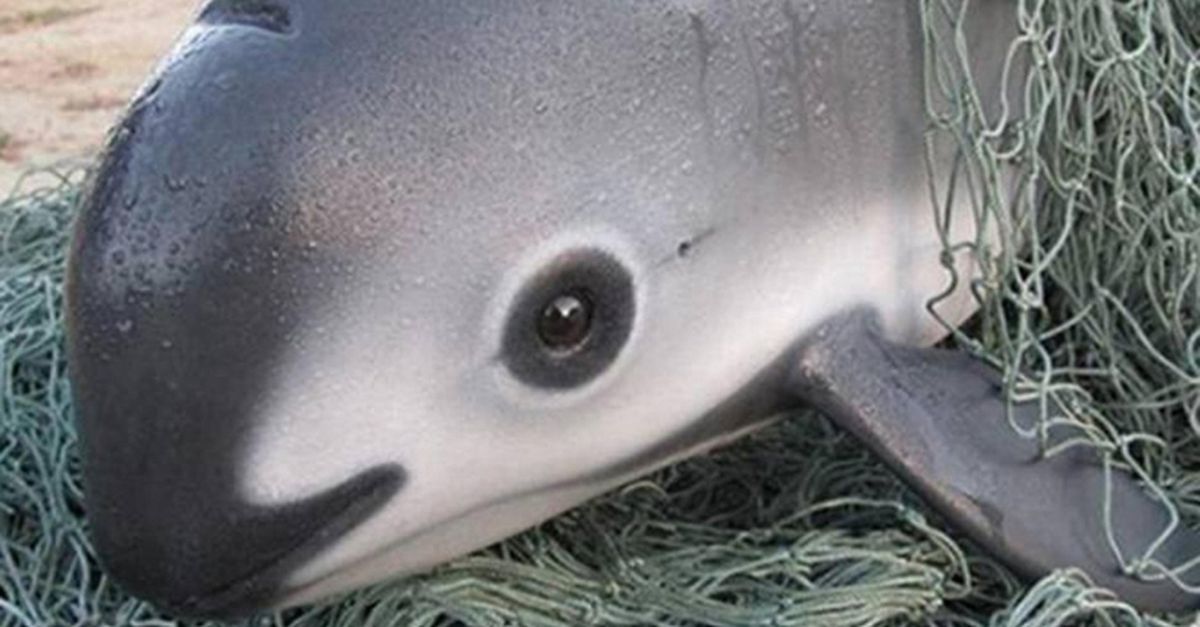 (The Mind Unleashed) Biologists in Mexico are warning that the vaquita porpoise, among the world’s smallest and most critically endangered marine mammals, is likely to go extinct by June.

The news comes as experts estimate that the total population of the rare mammal, which is found exclusively in the Gulf of California, to have been thinned out to about 22. The number is a slight increase from what was expected, with many having estimated that the number of vaquitas had dwindled to as few as 15.

Vaquitas are small, five-foot long cetaceans–the order that includes whales, dolphins and porpoises–who rely on fish and squid for their diet. With their snub stouts, dark eye patches, and smiling black lips, the vaquita has been referred to as a “marine Mona Lisa.”

“Cross Flipper with a very shy panda and you’ve bred a vaquita,” journalist Ben Goldfarb wrote for the Pacific Standard.

Surprisingly, much of the fault for their looming extinction lies in the ongoing trafficking of the rare totoaba fish, whose swim bladder is highly valued in China as a delicacy.

“They share their habitat with a fish called the totoaba, a mammoth cousin of the sea bass whose swim bladders are a delicacy worth up to $100,000 per kilogram in mainland China and Hong Kong. Although totoaba fishing has been banned since 1975—they, too, are critically endangered—poaching is rampant. Vaquitas, roughly the same size as totoabas, are prone to getting entangled and drowning in illegal nets.”

Each May, the Gulf–also known as the Sea of Cortez–often swarms with fishermen seeking the tototaba. Experts now fear that the next totoaba rush could literally wipe out what remains of the thinned out vaquita population.

“Until now, the government’s position has been to do nothing until the problem subsides. It’s very likely that by June, the species will be extinct … and the problem is no longer an issue. The trafficking of the totoaba fish will continue.”

Yet in the bigger picture, the fishermen–largely poverty-stricken laborers from the Baja coast–argue that they are small-fry targets who are at the mercy of Chinese-Mexican illegal dealers and profiteers who give high-interest loans allowing fisherman to acquire nets that cost up to $3,000 each, low-ball the price of totoabas, and sell their goods for an exorbitant profit in China.

“I know people who are dedicated 100 percent to that (totoaba) business, and don’t even have $10 to put gas in the tank of their panga … The Chinese are making the profit, that I can tell you.”

Investigator Andrea Costa from conservationist group Elephant Action League also noted that Mexican government efforts to crack down on the illegal fishing trade will continue to fail as long as fishermen are targeted, rather than middlemen and traders. Thanks to Costa’s efforts, 16 Chinese nationals were recently arrested by the Chinese government due to their role in the illegal totoaba trade.

China, for its part, has long maintained that it has a zero-tolerance attitude toward the illegal trade in endangered wildlife. However, since the country undertook market reforms in the 1980s, the expanding spending power of Chinese consumers has seen the demand and appetite for exotic fish and endangered animals translate directly into the depletion of endangered populations across the globe–from West Africa to the Galapagos Islands and now, the Gulf of California.

“As long as you hammer, put all your efforts only on the fishermen, only on removing the nets, you will fail. You don’t address the problem, and the problem is a very sophisticated supply chain As long as you don’t hit these people and you do that … you’ll bleed out, not only the vaquita but the whole marine life in the Sea of Cortez.”