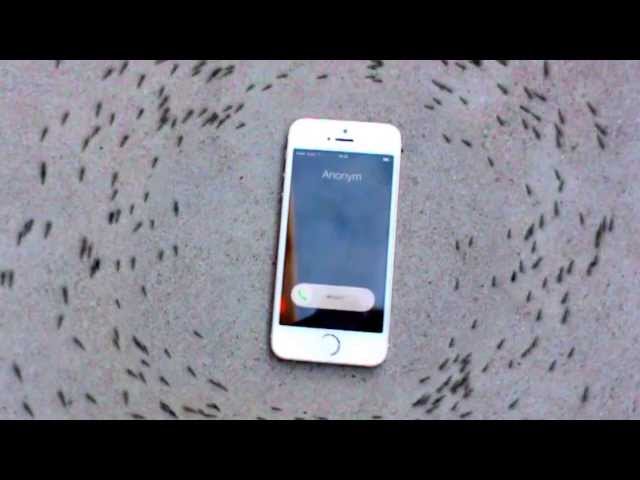 A curious video showing a group of ants racing in circles around an iPhone as it rings has gone viral, sparking a host of theories as to what could have caused the bizarre phenomenon.

In the clip the insects are initially seen walking normally in different directions.

When the iphone begins to ring and vibrate, however, the ants mysteriously form a ring around the phone, racing around it in almost perfect circles.

According to ViralVideoLab, who uploaded the video to YouTube, the ant’s weird behaviour is caused by an “electromagnetic wave” from the incoming call.

Nigel Andrew from the University of New England, agreed with this theory telling Yahoo7 News that ants often use magnetism to “orientate themselves”.

“[Ants] have magnetic receptors in their antennae.” he explains, “If they’re travelling long distances they use magnetic cues from the earth to know if they are going north, east, south or west.”

Another academic has sugessted that the odd behaviour could simply be due to the fact that ants are prone to circling things.

Simon Robson, a social insect specialist at James Cook University, told Yahoo7that the movement is “an unavoidable consequence of the [ant’s] communication systems.”

He explained that the large numbers of ants in the video and the shape of the phone may have influenced the insects’ behaviour, yet “a lot of ants will do it even without the phone.”

Sanford Porter, an entomologist from USDA, told Discovery News that an ant will follow the “trail pheromone” or “trail chemical” of the ant in front of it, so that they “endlessly follow their neighbour”.

The ants movement he suggests could mean that the trails have become ”looped around themselves”, causing them to form a circle.

Others have suggested that the strange behaviour could simply be because the video is a fake.

“Not that ants can’t be tricked into doing amazing, fascinating behaviours but something about the movement in general doesn’t seem quite ant-like to me.”