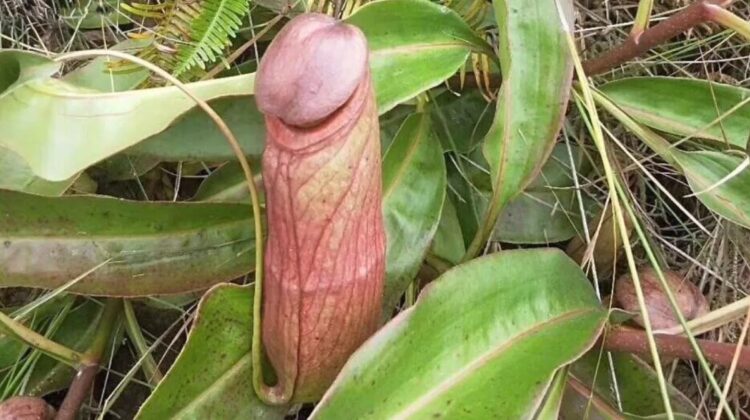 Images of the ‘penis flytrap’ plant went viral in March 2019. The name is a play on the name of the plant Venus flytrap (Dionaea muscipula), which may be an oblique allusion to the plant’s resemblance to human female genitalia.

To begin, here’s a picture of a Venus flytrap.

Let’s go back to the phallic-looking one. The plant is native to the Philippines and is a member of the genus Nepenthes.

Despite the fact that the image’s origins are unknown (see full version below), Snopes conducted a fact check and determined that the image is genuine and depicts the plant in question. They even asked Clinton Morse, the living plant collections manager at the University of Connecticut’s Department of Ecology and Evolutionary Biology, about the image, and he responded as follows:

As a result, the images are most likely of Nepenthes philippinensis, a tropical pitcher plant found only in the Philippines. It grows from 0 to 600 meters (2,000 feet) above sea level in Palawan and the neighboring Calamian Islands (Busuanga, Coron, and Culion), as well as Linapacan.

When the pit trap has fully grown and the lid is lifted, the plant appears less phallic (as opposed to the phase dubbed “penile” by some critics). The open trap fills with water to entice insects that fall into it, with the plant scavenging the nutrients in the decaying carcasses, according to a 1999 assessment of the genus’ carnivorous habit.

So, if you travel and discover the highlands and islands of the Philippines, there’s a good possibility you’ll stumble across this plant — in either phase.

But here’s something you definitely don’t want to miss: Please stop picking this plant that resembles a penis or it will become extinct!

Please do not pick nepenthes bokorensis, also known as the carnivorous penis plant, if you find it in Cambodia.

Cambodia’s Department of Environment recently issued a Facebook appeal urging people to stop picking the plant because it may become extinct.

The ministry was apparently reacting to a viral video showing three women picking the carnivorous penis plant and taking pictures with it. The incident occurred on Bokor Mountain in Kampot, according to the Daily Mail.

Because of its appearance, the pitcher plant is frequently compared to a penis. However, its shaft-like tube is critical to the plant’s survival because it attracts insects to feed.

“Thank you for caring about natural resources, but please don’t pick the flowers or they will be ruined,” Cambodia’s Department of Environment said on Facebook in Khmer.

According to botanical illustrator François Mey, the species’ survival is jeopardized due to land clearing activities in the Southeast Asian country.

“It’s fine if people want to pose or take selfies with the plants, even if it’s in a funny way. Just don’t pick the pitchers because it weakens the plant, and the plant relies on these pitchers to feed,” Mey told Live Science.