Pizza, “the saddest polar bear in the world,” is said to have at least a short break from the “showcase” in which he lives in the Grandview shopping center in Guangzhou, southern China.

This is followed by a worldwide outcry, with one petition and one million signatures, and the joint efforts of 50 animal rights organizations in China.

This step is welcome news for all people concerned about the welfare of animals in general and the welfare of pizza in particular. Pizza showed what ethologists call “stereotypical behavior” – going back and forth, “shaking his head from side to side and sniffing and pawing at an air hole.” In short, whether out of boredom or stress, when he constantly flashes camera flashes in the eye or hits visitors to the windows of his enclosure, pizza seemed to be gradually losing his mind.

Pizzas misery is unfortunately not an isolated case. Even in more formal zoos and aquariums, social beings who are used to walking far, climbing high, or flying high, are often alone and isolated, in spaces too small to meet their basic needs, and where they are either too much attention of the wrong kind, or experience indifference or neglect. Like pizza, these animals wander restlessly and endlessly through their bare enclosures or spend their days in despair, turned face to the wall. 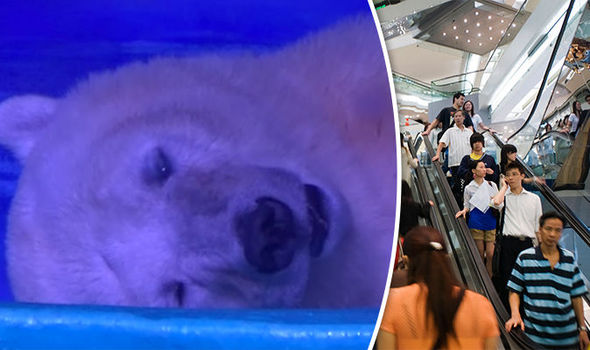 Pizza was taken to the zoo in Tianjin near Beijing, where he was once born. However, the mall spokesman said that he will come back as soon as the bear’s enclosure has been renovated. Qin Xiaona, director of Beijing Animal Welfare Association and one of the main voices in favor of pizza, said to the three-year-old bear, “It’s a good decision, the right decision for pizza, but it is not final. Temporarily is not good enough. ”

She’s right – and that’s not just pizza. What he and the 500 other species Grandview hosts is room to roam, a chance to be with their fellows, and an opportunity to express their natural behavior – to seek, hunt, hunt down a partner to hide and play, in other words: (at least something) to be free.

If, for whatever reason, they can not survive in the wild, they should be withdrawn to protected areas in regions that are climate and geographic appropriate.

When nature is made into a commodity

It is, however, what we want and need for strange, profit-seeking, bipedal primates that are probably the most baffled and disturbed. In all societies we are attracted to charismatic wildlife such as bears, lions, wolves, tigers, eagles and others. These top predators have exerted their talisman power beyond our imagination, perhaps even before our species began to consider themselves separated from them (and superior to them). We long for their physical energy, their “otherness,” their fearsome strength and unusual grace, as well as their (compared to our) more advanced senses such as smell and hearing.

No matter if these animals live in zoos and aquariums or in this special shopping center, we only wish to have this closeness in order to deprive them of everything powerful and savage. We want them to acknowledge us, but not in a manner that demands something from us except our entertainment, amusement, and our desire to exercise control over them in their captive state.

Grandview’s placement of pizza and other animals in his mall is not just clever marketing. It is rather a symbol of the objectification and marketing of nature by the global consumer society.

In this context, animals and nature only have value if they can be used profitably.

Pizza, whose name characteristically describes its identity as something consumable, is virtually demoted to another exhibit in the midst of all the goods for sale in the mall.

It’s another product that allows shoppers to spend one or two fun, hilarious or carefree minutes before moving on to another distraction.

Grandview has incorporated pizza into its replacement winter landscape because management feared losing buyers to online retailers. In other words, it took a bit of nature to rip people off the Internet and get them to visit the real mall. (How many more shopping malls in China or anywhere else will it mimic?) But what do most people do when faced with the living, breathing and feeling bear? They go back to yet another screen to turn that creature into the camera in their cell phones, from Pizza’s real existence in his unnatural reality in the store to their digital world.

The biggest irony might lie in the possible interpretation that the lonely picket of pizza in a miniature landscape reflects the climate crisis that is typically pictured today by the iconic representation of a lonely polar bear on a dwindling ice floe. In this sense, the disappearance of pizza into the virtual world indicates the disappearance of millions of other species because humanity has so far failed collectively to act decisively to limit greenhouse gas emissions.

Qin Xiaona’s observation that “temporarily is not enough” could go far beyond the fate of pizza and other captive animals like him. It could be a call to the collection to prevent or even reverse our seemingly insatiable destruction of this unique Blue Planet that is our home and millions of other species.
They need, like us, a safe space without being made object and exposed to destruction in which we all can breathe and be the unbound, self-determined beings we once were and could be again.