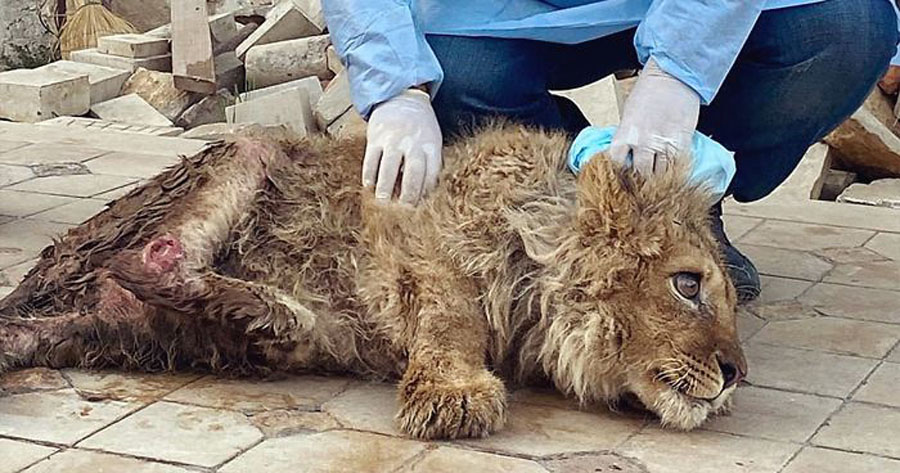 A photographer took a baby lion cub from his mother and used the cub to pose with tourists on Russian beaches to take selfies with the animal.

In spite of the never ending efforts of animal rights activists, rescue organizations and foundations all over the world, cruelty, abuse and exploitation of animals continue without retribution of the guilty. We hope and trust the sad case of a young lion cub, now named ‘Simba’ by his rescuer, will have a different outcome.

A photographer in Russia took a baby lion cub from his mother when he was just a few weeks old and used the cub to pose with tourists on Russian beaches to take selfies with the animal. When the cub was a bit older, he deliberately broke his hind legs so it could not get away from the tourists, or his abuser for that matter.

Reports claim the animal became ill and was ‘tortured and beaten’ by the  photographer. The cub’s spine was seriously damaged and he was close to death when his keepers apparently dumped the helpless animal in a cold and dirty old barn in the Russian region of Dagestan. Yulia Ageeva, who led a rescue mission said: “He was practically not fed, and for some reason, in the frost water was constantly poured over him. This was a real hell.’’

Rescued from his life of abuse, Simba was flown to specialist vet Karen Dallakyan who was shocked by the cub’s condition and said the animal had suffered ‘an ocean of pain from humans’. He continued: ‘’Evil photographers break bones like this so that wild predators cannot escape and behave calmly for pictures [with tourists].’’ After surgery was performed by Dallakyan on Simba, he is able to walk again after months of rehabilitation but unfortunately is permanently deformed.

Simba also suffered from pressure sores, intestinal obstruction and atrophy of the muscles of the hind limbs. Dallakyan had a video conference during lockdown with ecologists and President Putin about the horrific incident and emphasized: ‘‘We do not see any criminal case opened.’’

The unnamed photographer who used Simba in Sochi last summer had denied ever torturing the animal, claiming he had passed the cub on to new owners.

According to vet Dallakyan, the cub’s gradual recovery was a ‘miracle’. Simba had to learn to walk and play again. With much love, patience, play, and toys, he is becoming a normal young cub and we hope the memory of the trauma of his past will fade with time.

Vet Dallakyan helps rescue hundreds of animals, domestic and wild, including animals such as tigers, snakes, birds, hedgehogs from cruel and abusive situations. He heals their injuries and provides them with safe shelter, food and love.

Thousands of animals experience cruelty all over the world. Should you see or become aware of animal abuse, you can help by reporting it to your local animal rescue organizations or contact your local veterinary hospital for help or advice. If you are able to, consider donating to animal rescue and shelter organizations or volunteer to help the animals to trust humans again.