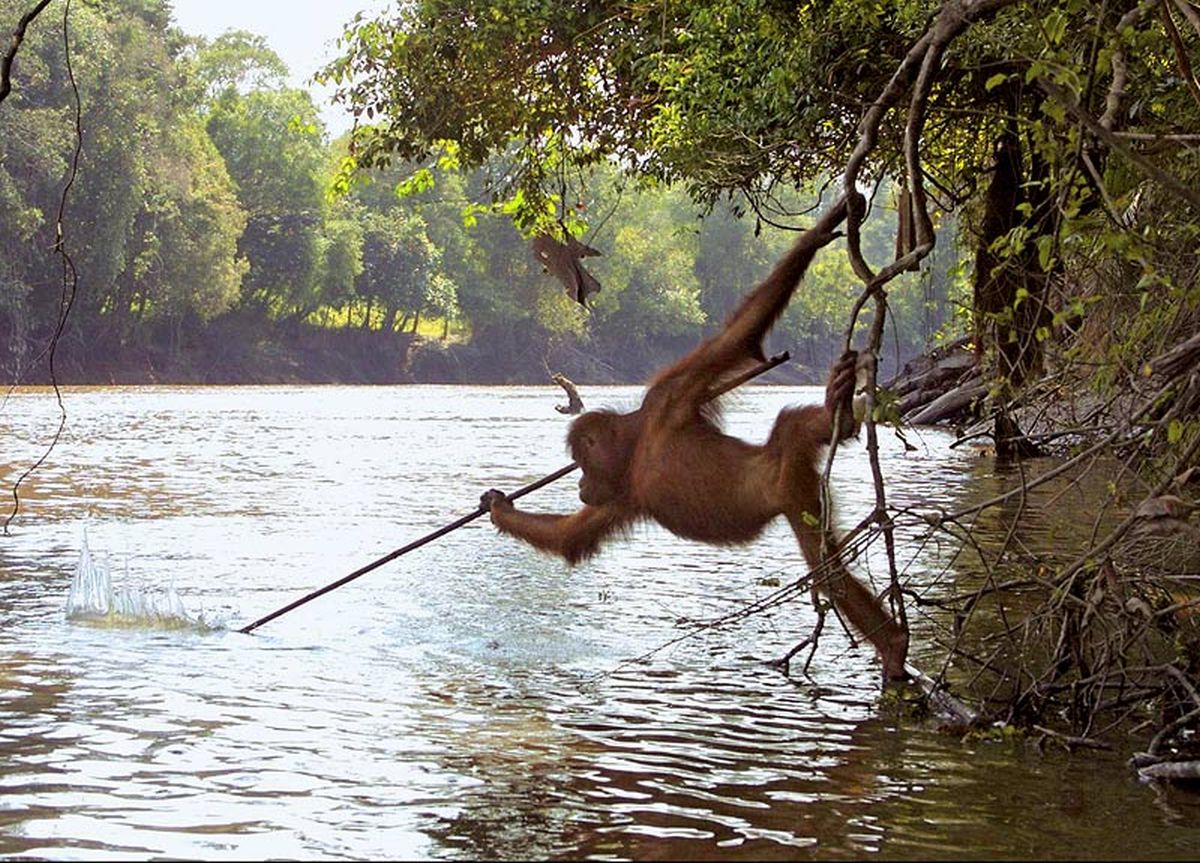 Orangutans are intelligent animals, unlike humans. They have a great ability to observe and imitate people.

Over the years, orangutans have been recorded brushing their teeth, bathing themselves, washing clothes, weeding pathways, wielding saws and hammers, and soaking rags in water. They use sticks to search for ants under tree bark, make hats and umbrellas out of large leaves, and drape themselves with lianas as if donning necklaces.

However, not many believe in the unique intellect of orangutans. So, when a photo showing an orangutan spearfishing in Borneo went viral, doubts were raised if it was real or fake. Well, the photo of a spearfishing orangutan is real. Gerd Schuster, co-author of the book Thinkers of the Jungle: The Orangutan Report described the photo he captured as:

“A male orangutan, clinging precariously to overhanging branches, flails the water with a pole, trying desperately to spear a passing fish… The extraordinary image, a world exclusive, was taken in Borneo on the island of Kaja… This individual had seen locals fishing with spears on the Gohong River. Although the method required too much skill for him to master, he was later able to improvise by using the pole to catch fish already trapped in the locals’ fishing lines.”

An orangutan using a sharpened stick to try and spear fish as they swam by, using fingers and toes to anchor himself on the branches of a tree overhanging the water, was a sight never previously witnessed. Richard Zimmerman, founding director of Orangutan Outreach, says:

“The orangutan pictured is just one of hundreds living at the Nyaru Menteng Orangutan Rehabilitation Center, which is operated by the Borneo Orangutan Survival Foundation in Borneo (Indonesia). This orangutan, like the 650 others at Nyaru Menteng, is an orphan. He watched as his mother was murdered and his forest home was destroyed. You can see him and the others on the series “Orangutan Island’ on Animal Planet.”

Thinkers of the Jungle describes the relentless demand for land for agriculture, the continuing loss of invaluable rainforest, and the worsening plight of the orangutans in detail. It warns that unless something is done quickly, orangutans may disappear from the wild within 10 years. The Telegraph reports:

“The male orang lives in a sanctuary on the island of Kaja in Borneo which rescues animals driven out of their traditional rainforest home by loggers and palm oil plantation owners. The great apes, which share 97 per cent of its genes with humans, are routinely slaughtered if they get in the way of workers. Often, they are butchered and their meat sold in shops with the animal’s decapitated head used as an adornment.”