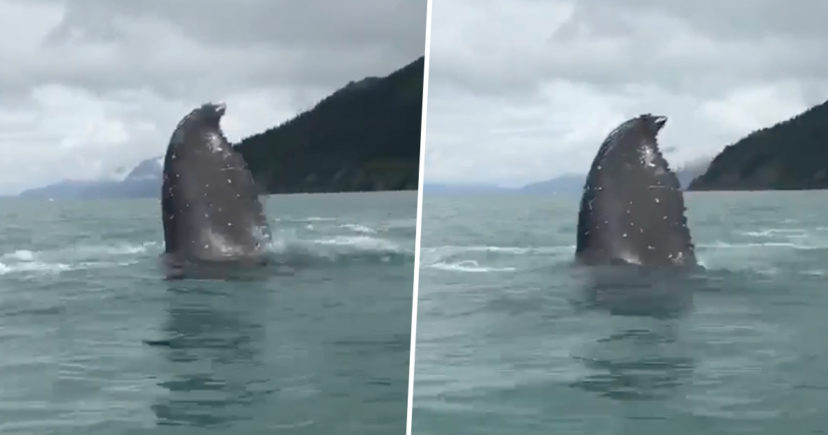 Hey, a bunch of kayakers off the coast of Alaska just bumped into your mom!

Jokes. But honestly, look at this size of this humpback whale in all its mysterious glory.

Here in the UK we seldom come across such large creatures (except at your mom’s house!) and therefore marvel at such footage.

Taken near Fox Island outside of Seward, Alaska, Cara Wallschlaeger and guide Andrew Smith were enjoying a simple kayak when they chanced upon the beast.

As they had the morning off, they decided to venture out to Rugged Island where orcas were known to knock about.

As they were paddling out, the pair saw a familiar humpback whale breaching many times far off in the distance. As they were in between Hive and Fox island, Cara and Andrew were able to get close to this whale a few times, doing a sounding dive within paddle reach of Andrew’s kayak.

Excited by how close they were getting, and also needing to head back for our afternoon trip, the two decided to turn back north. The whale came up next to them a few more times and continued to manoeuvre sideways and even underneath our kayaks.

Thankfully, I had my phone ready as can be seen in the video as he manoeuvred sideways through the water right in front of me in my kayak. My heart was definitely pounding!

Quite the week for humpback whales, huh? Not far from Alaska, in Canada, one of the plucky swimmers swam right up to some lodgers. That’s folk staying in a lodge not that bloke who sleeps in your spare room and always gives your mom a wink.

In an incredible and dramatic scene captured on camera, a collection of the marine mammals made an appearance just off the edge of the dock of a lodge in Canada, with a group of onlookers watched excitedly from the Great Bear Lodge in Port Hardy, British Columbia, as the whales splashed around in the water.

Presumably having spotted what was happening, the visitors at the lodge gathered on the dock and were near enough beside themselves as they realised that they were about to see humpback whales up close and personal.

Staring at a circle of bubbles in anticipation of all your moms, the onlookers remained silent, probably praying that the whales didn’t bugger off before they could take a pic for bragging rights on the ‘Gram.

One of the women pointed towards the water, and seconds later two humpbacks burst from the depths. Everyone was loving it.

Two of the women high-fived at their luck, and turned back to the water just in time to see the whales rise up one last time before dipping back into the sea.

The lodge’s Instagram page posted about the spectacular event.

What an amazing morning – humpbacks came for breakfast! We’ve never seen them this close to the lodge before, and so fantastic to see them bubble netting. Nearly as good as the whales was the reaction of our guide, @Marlosha, who was pretty excited! The guests didn’t mind being woken up for this.

If you have a story you want to tell, send it to [email protected]