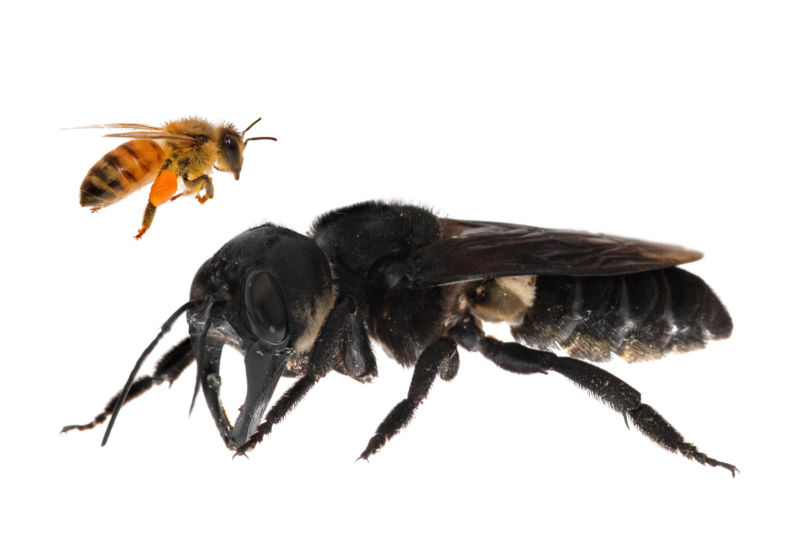 Wallace’s giant bee (Megachile pluto) is the largest bee in the world and was thought to be extinct for the past 38 years, but it was recently discovered again on the Indonesian islands of the North Moluccas.

A team of biologists from North American and Australian made the discovery inside a termites nest in a tree.

Clay Bolt, the photographer who took the first photographs of the species said that they were amazed to see a bee so large.

“It was absolutely breathtaking to see this ‘flying bulldog’ of an insect that we weren’t sure existed anymore. To actually see how beautiful and big the species is in life, to hear the sound of its giant wings thrumming as it flew past my head, was just incredible,” Bolt said.

The bee was only known to humans for a short time. The species was discovered in 1858 by the British explorer Alfred Russel Wallace, on the nearby Indonesian island of Bacan.

After that first sighting, scientists were not able to spot the bee again until 1981. In that year, an American entomologist named Adam Messer found the bees in multiple different places, spread across three Indonesian islands.

You would think that the bee would be easy to find because of its large size, but it has been able to evade researchers for years, with many of them believing that it was extinct. Some experts believe that the bees spend much of their time making nests of tree resin inside active arboreal termite mounds.

Last year a dead specimen was sold at an online auction, but that offered no proof of the species existence. The specimen may have fetched a higher price on account of its supposed extinction. Last year, it was also revealed that another researcher discovered one of the bees in 1991 but never actually reported or recorded the finding.

Robin Moore, a conservation biologist with Global Wildlife Conservation, says that collectors actually seek these bees out because they are rare, which actually contributes to their endangered status.

The islands have also become home to oil palm plantations that now occupy much of the former native habitat. This has caused the International Union for the Conservation of Nature (IUCN) to label this species as Vulnerable.

“We know that putting the news out about this rediscovery could seem like a big risk given the demand, but the reality is that unscrupulous collectors already know that the bee is out there. By making the bee a world-famous flagship for conservation we are confident that the species has a brighter future than if we just let it quietly be collected into oblivion,” he said.

It seems that scientists don’t really know how many of these bees are actually in the wild, which actually seems to be the case with many endangered species.

Wallace’s giant bees build communal nests inside active nests of the tree-dwelling termite Microcerotermes amboinensis, which may have served to hide their existence even from island residents. The bee uses tree resin to build compartments inside the termite nest, which protects its galleries. Female bees leave their nests repeatedly to forage for resin, which comes frequently from Anisoptera thurifera. The bee’s large jaws assist in resin gathering: the female makes large balls of resin which are held between the jaws. The association of the bee with the termite may be obligate.

Last week, AnonNews.Co reported that the eastern Puma was officially extinct. The eastern puma was a breed of cougar that once roamed from Quebec to South Carolina and from Manitoba to Illinois. There are still many mountain lions in the western Americas, so scientists are hoping that species from the west can be reintroduced into the east.

The Fish and Wildlife Service estimated that the species probably disappeared over 70 years ago, but researchers are just now getting around to realizing it. The agency first began investigating the possibility of extinction in 2011, and officially recommended removal in 2015.