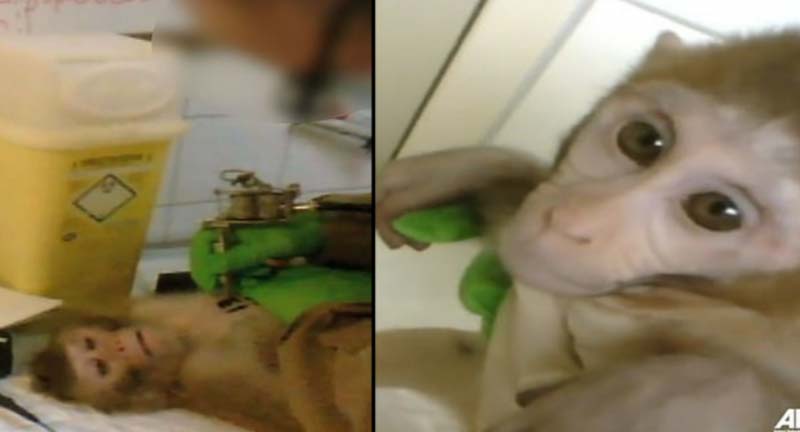 At the single largest primate research center in Europe, horrific conditions were caught on footage and now it has been released.

According to Animal Defenders International (ADI) animal rights activists, they captured the film with the use of hidden cameras in the Netherlands at the Biomedical Primate Research Center.

In the footage, you can see the monkeys suffering through injections with various sedatives, even being tattooed, while being fully conscious and aware of the pain they are enduring.

It was reported that some of the monkeys even suffered severe injuries after their cage mates lashed out and attacked whatever they could find, unable to cope with the horrific traumas being inflicted upon all the animals.

According to one article:

“The animals were sedated but remained conscious during procedures and were reportedly able to feel. Then when they were coming round from the injections they were left unattended and groggy, making them vulnerable to injury.”

Another detail was captured in the footage that really illustrates the psychopathy of people involved with this: one of the captors of the monkeys was gently singing a song, seeming to have a fine, good old time abusing the animals, with ADI adding that they were “oblivious to their plight.”

The monkeys were carelessly allowed to suffer injuries from fighting with their counterparts, and it is even alleged that when they were of no more use to the facility, they were ruthlessly put down, even in full view of their rather intelligent primate cage mates.

So articles discussing this took a quote from a woman who really isn’t to be trusted at all if you understand the way the world works. UN Messenger of Peace and Founder of the Jane Goodall Institute, Jane Goodall said:

“The way they are being treated in the video is shocking and inhumane. It is my considered opinion that those involved in this kind of research on primates should consider using alternative procedures that do not involve experimentation on intelligent, sentient beings. This research should be phased out as soon as possible.”

Yes Jane that’s true, but people reading this aren’t going to forget you’re an elitist advocate for population control, and you work with the United Nations, not very much toward the interest of the common people. Either way what she said is what anybody could have said and it rings true.

“The Biomedical Primate Research Centre is Europe’s largest facility, breeding animals for its own use and other laboratories, collaborating with researchers in the UK and the US. According to the MailOnline, latest figures show that it has more than trebled its primate use, from 95 individuals in 2016 to 317 in 2017.”

The facility that shouldn’t even exist if science were to be bound by the very legitimate and necessary boundaries of morality, has about 1,600 primates. Most of those primates are macaques, kept imprisoned in breeding groups of 20-40 animals.

The footage released by this organization on September 1, “international primate day,” was actually recorded in March 2017. Outrage generated by this footage is plentiful, and very much needed. One person wrote on social media: “I can’t watch that, what I will say is people who participate in those deeds are sadists, there’s absolutely no need for it!”

Another commenter added: “MONSTERS!!!! This must be what inspired the horror films about alien abductions, being probed and tortured by sociopathic aliens like pieces of meat.

“This is what these poor beings endure. It is beyond horrific. It is the stuff of the worst, most disturbing nightmares. I hope this video has the same impact on those with the power to stop it.”

It seems the most defenseless, vulnerable animals, human beings, even plants can be found where nobody thinks any danger exists at all. In a culture where everybody believes they are safe, people don’t watch out for the welfare of creatures with as much strength and energy, with as much defense and conviction as in places with danger.