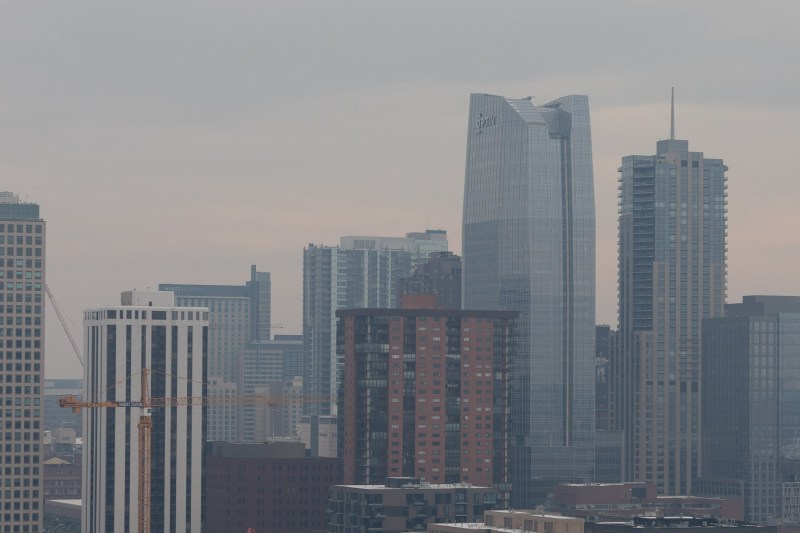 Today from downtown Denver, the peaks of the Rocky Mountain foothills were barely visible through the brown cloud of pollution that covered the region with an unhealthy level of fine particulate matter.

Colorado’s “brown cloud” is an increasingly frequent reminder of the Denver-Boulder metro’s car dependency and the impact of the state’s oil and gas production, which the industry projects will generate $12.5 billion in revenue this year.

Kyle Clark, a 9 News anchor, reported that 30 to 40 percent of ozone levels — a related form of pollution that is not responsible for the brown cloud — result from the state’s oil and gas industry. Traffic generates similar levels, he tweeted.

He also pointed out the irony of today’s extreme air quality problems with the intense oil and gas industry lobbying that happened at the state capitol today as legislators considered sweeping environmental reforms.

Oil & gas workers rallied against Democrats' proposed environmental restrictions outside the #coleg today, while Denver was under an air quality advisory. A federal/state study found oil & gas ops are responsible for 30-40% of Front Range ozone levels (similar to traffic) #9NEWS

Reducing car dependency could help the region achieve clearer air, and Denver has plans to do exactly that. But the city is better at setting goals than achieving them.

The city plans to supplement current bus service with a high-frequency transit network. The proposal is part of the long-term planning process known as Denveright, which will be finalized later this year.

But there are no concrete plans for the city to come up with the funding needed to provide the improved transit service promised in the plans.

Meanwhile, the Colorado Department of public health warned all people in the area to “reduce prolonged or heavy exertion” today and tomorrow, especially “people with heart or lung disease, older adults, and children.”

Looking northeast from a downtown high-rise, it was almost impossible to see a nearby refinery. A crown of smog usually hovers over its buildings. But today its dirty halo blended into the thick haze of visible pollution that extended as far as the eye could see.