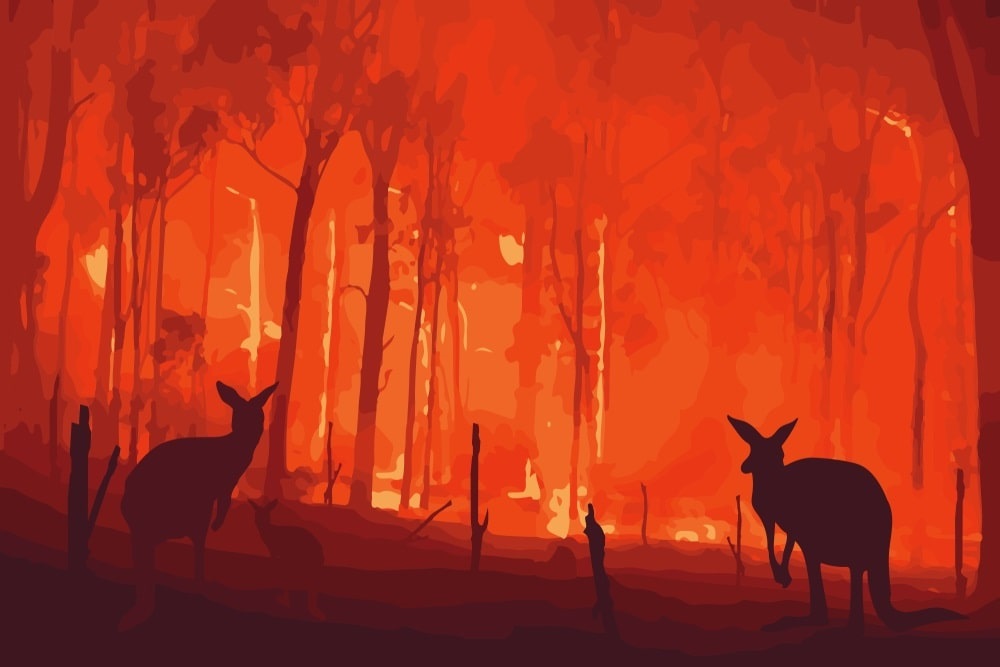 Residents on the outskirts of Perth in Western Australia fled their homes in the middle of the night, just days after being told to stay in because of the coronavirus.

The state of Western Australia is facing an “unprecedented situation” as it battles a raging wildfire while millions of residents are under coronavirus lockdown, the state’s premier Mark McGowan said in a media briefing Wednesday.

The Perth metropolitan area and the Peel and South West regions of Western Australia went into a five-day lockdown Sunday after a single Covid-19 case was identified in a hotel security guard at a quarantine facility in the city. The lockdown is set to lift Friday evening.
But the potential threat of a Covid-19 outbreak has been superseded by a more imminent danger — a bushfire raging near the town of Wooroloo on Perth’s outskirts.
“The most important thing is preservation of life and so if you’re quarantining and you’re required to evacuate, you should just evacuate,” Western Australia’s Department of Fire and Emergency Services (DFES) Commissioner Darren Klemm said in a media briefing Wednesday. “That evacuation overrides any quarantining requirements that people might have.”
The blaze has already destroyed at least 71 homes, he said, adding that there were no reports of any deaths due to the fire. The number of burned-out homes is expected to rise, McGowan said.
“Western Australia is currently in the midst of an unprecedented situation, we’re fighting disasters on two fronts,” McGowan said.
A helicopter drops fire retardant on a fire near Wooroloo, northeast of Perth, Australia, on February 2, 2021.
Klemm said it was important that people didn’t become complacent and kept abreast of updates, adding: “It will continue to be a challenging fire for us for at least the next three, four, or five days.”
As of Tuesday evening, more than 8,000 hectares (nearly 20,000 acres) had been burned and hundreds of firefighters were involved in controlling the fire, according to DFES. The department said the cause of the “out-of-control” blaze is unknown.
Three evacuation centers have been set up, and DFES said it was “humbled” by the number of people wishing to help members of the community impacted by the bushfire.

More than 2 million people are affected by Western Australia’s “full lockdown,” with residents only able to leave their homes for essential shopping, medical needs, exercise, and for jobs that cannot be done at home or remotely.
Schools, most businesses, entertainment venues and places of worship are all closed, and restaurants restricted to takeaway only.
With a population of around 2.76 million, Western Australia has recorded 904 coronavirus infections since the pandemic began, though it currently only has nine active cases, according to the state’s health department. More than 800 of the state’s confirmed cases are among international travelers and people who arrived by cruise ship or other vessel.
Australia has recorded more than 28,000 Covid-19 cases, with 909 fatalities, the majority of which occurred in the southeastern states of Victoria and New South Wales. The country has shown success in controlling the virus through stringent lockdowns and tight border controls, with all international visitors required to undergo testing and quarantine.
Other parts of Australia have also gone into lockdown over relatively few cases.
Last year, South Australia ordered a six-day shutdown after reporting 22 Covid cases, although those restrictions were lifted early after officials found a pizza bar worker had lied to the contact-tracing team, making authorities initially believe the person had caught coronavirus after a very short exposure.
Brisbane also ordered a three-day lockdown last month after a cleaner from a quarantine hotel tested positive for the coronavirus variant first identified in Britain.