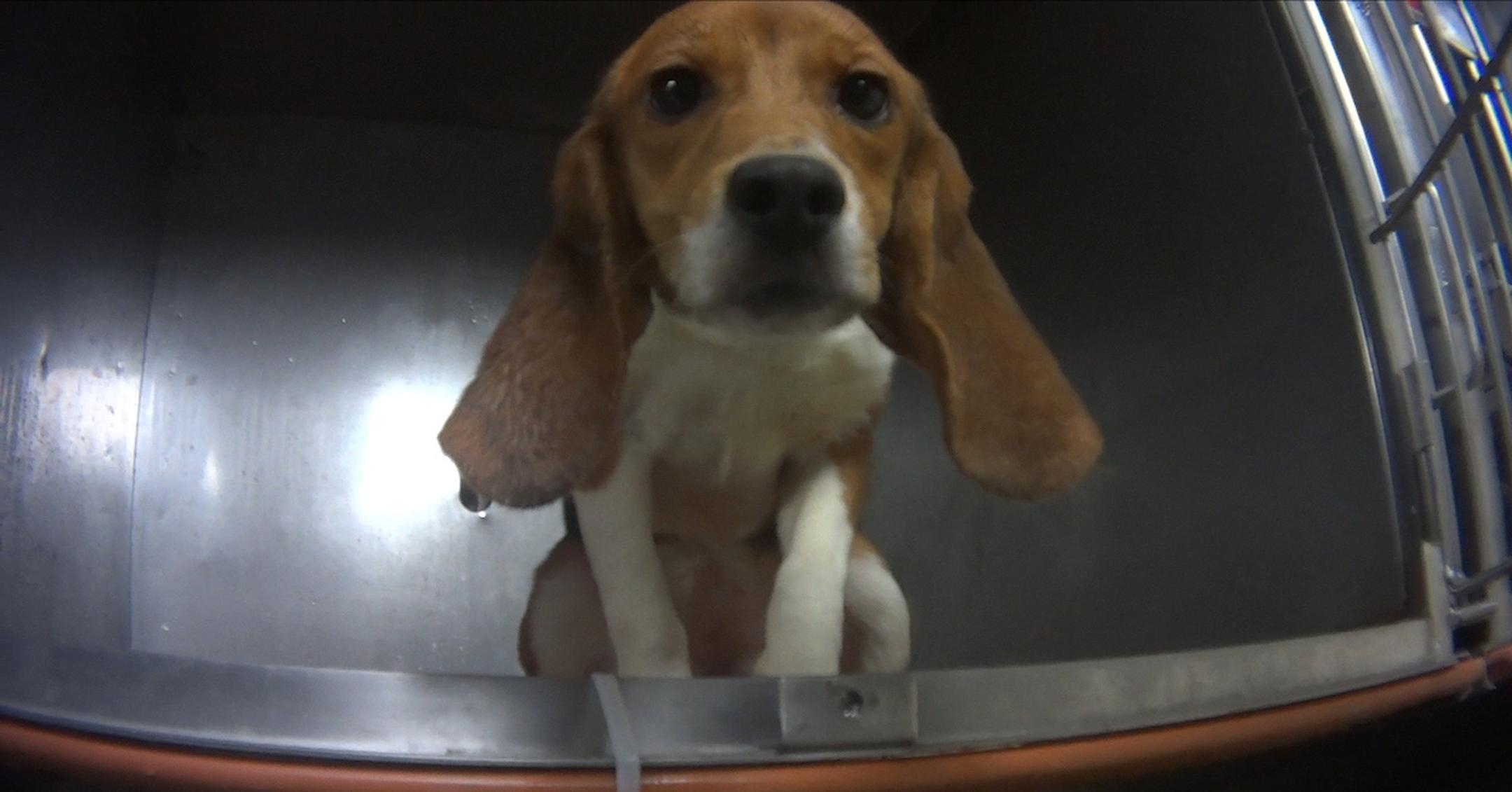 Each year, lab tests are conducted on more than 60,000 dogs across the United States — and unfortunately, it is standard practice to kill each animal that makes it out of the tests alive. But one particularly inhumane test on a group of beagles came into national attention last week, and thanks to the efforts of the Humane Society of the United States (HSUS), the lab has agreed to release all 36 beagles.

On March 12, the HSUS published the results of an undercover investigation into Charles River Laboratories in Michigan. As per the report, an undercover investigator worked in the lab for 100 days, where they witnessed (and photographed and filmed) around 20 different cruel tests on dogs. The most notable study was a year-long test of a new fungicide (a class of pesticides designated to kill fungi growth) called Adavelt, made by Dow AgroSciences, which was force-fed to a group of 36 beagles living in cages.

As the HSUS reported, all of the dogs were scheduled to be killed in July 2019 so that their organs could be studied for fungicide damage. The HSUS received more than 311,000 signatures on a petition demanding that Dow AgriSciences’ agriculture division Corteva AgriScience release the beagles, and the company has finally complied.

On Monday, Corteva AgriScience released a statement on Twitter announcing that the study has ended early, and that the beagles will be freed. “Today we received official confirmation that the tests we were seeking to change are no longer required for our product,” the statement read. “We have immediately ended the study that was the subject of attention last week and will make every effort to rehome the animals that were part of the study.”

We've been working to refine, reduce, & replace animal tests for years. Today we’re pleased to announce our efforts resulted in a waiver & we can stop the study. We’ll make every effort to rehome the animals. Please read our full statement. pic.twitter.com/SQc5RJg41M

Not only is animal testing cruel to the furry subjects, but the tests are also often inaccurate markers of how chemicals will affect humans. As Futurity reported, a 2018 study led by Thomas Hartung of Johns Hopkins University found that data analysis is a better predictor of chemical toxicity than animal testing. Additionally, animal tests are typically more expensive and wasteful than more modern methods of testing.

Kitty Block, HSUS president and CEO, celebrated the lab’s decision to free the dogs. “We applaud Dow AgroSciences (Corteva AgriScience) for making the right decision by ending the one-year pesticide test on 36 beagles at Charles River Laboratories in Michigan. This is a significant step that is critical to the welfare of the dogs,” Block said in a statement sent to Green Matters. “We now urge Corteva to work with us to get the dogs out of the laboratory and to our shelter and rescue partners so that they can be adopted into loving homes.”

BREAKING: Dow AgroSciences (@corteva) announced it has ended the dog test we recently exposed in our undercover investigation. We are grateful they have taken this step, & hope they will work with us to re-home the animals so they get to experience life outside of a laboratory. pic.twitter.com/Kf6ewQITTT

The HSUS is currently working on rescuing the dogs and bringing them to HSUS shelters, and the animal welfare organization plans to update Green Matters with adoption information once it is sorted out.

In the meantime, there are plenty of ways to make sure your dollars are not funding animal testing. You can commit to only buying cosmetics and cleaning products that are certified cruelty-free (which means they were not tested on animals); you can donate to organizations fighting against animal testing, such as the HSUS and Cruelty Free International; and you can seek out and sign petitions fighting against animal testing — because as the HSUS proved this week, petitions can make a huge difference in saving lives.