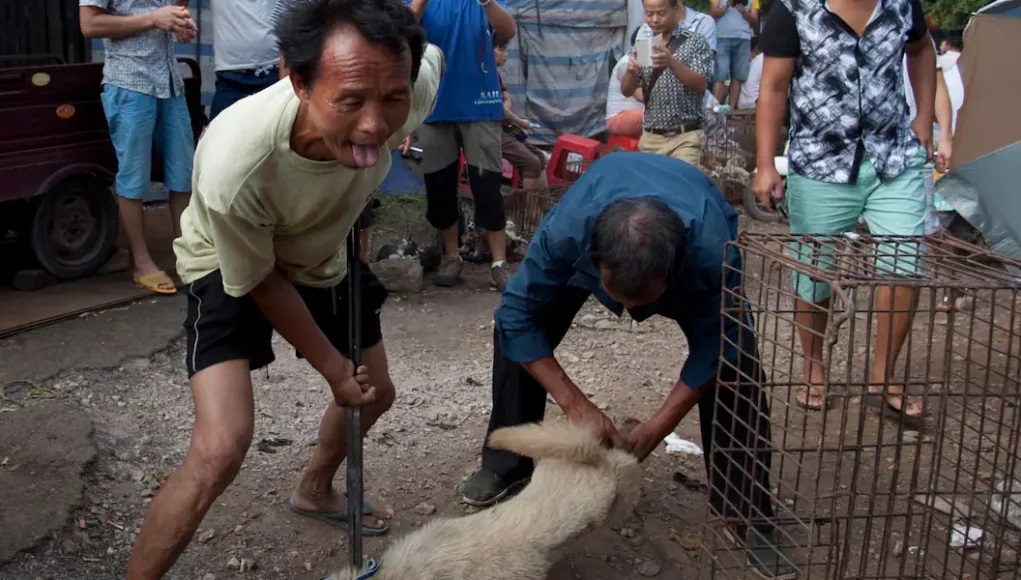 CHINA – Thousands of people flock to the dog meat festival in Yulin in the southern Chinese region of Guangxi every year – even though the controversial event has drawn criticism both in China and abroad.

The festival, which has been held for more than a decade, spans ten days. Visitors come to eat delicacies such as dog meat stew and crispy dog meat.

Often the dogs are boiled alive or “pre-treated” with a flamethrower, because the meat is supposed to taste tastier due to the adrenaline released in the body.

The event begins on June 21 – the day of the summer solstice. Pictures of the dog meat festival in Yulin from the last ten years show the cramped conditions in which the animals are kept and how they are finally sold in the markets.

According to Humane Society International (HSI), it is almost impossible to say exactly how many dogs are killed each year because no official figures are available. However, it is believed that the number is in the thousands.

HSI estimates that the number of dogs killed is in the thousands, according to reports from activists on the ground. Most of the dogs at the festival were stolen from their owners or snatched off the street as strays.

“There is very vocal opposition in China to the dog meat trade, and that includes what’s going on in Yulin,” Peter Li, China expert for Humane Society International, told Newsweek. “Most people want nothing to do with cruelty, and there’s a new, young, affluent generation of Chinese who care deeply about their pets and are appalled by dog thieves.”

“There is very vocal opposition in China to the dog meat trade, and that includes what’s going on in Yulin,” Peter Li, China expert for Humane Society International, told Newsweek. “Most people want nothing to do with cruelty, and there’s a new, young, affluent generation of Chinese who care deeply about their pets and are appalled by dog thieves.”

“Over the years, there have been many appeals to the authorities to introduce a ban, and this is certainly supported and encouraged by support from the West,” Li said.

“But it’s really important to recognize the tremendous energy that exists in China for change. There are hundreds of dedicated animal rights activists who intercept dog and cat transports on the street, get the police involved to seize the animals, and take care of them after they’re rescued.”

It is estimated that around 10 million dogs and four million cats are killed for their meat in China every year. However, surveys suggest that dog meat is consumed by only a small portion of the Chinese population. A 2016 poll found that more than half of Chinese believe that the dog meat trade should be banned.

The animals slaughtered at the festival are often transported and kept in poor conditions and killed in brutal ways.

“Cruelty and suffering exist in every part of this trade,” Li said. “In Yulin – or any other destination – the dogs are forcibly unloaded, with the cages routinely thrown out of the truck and slammed to the ground. Physical injuries from the sharp wire cage, bites, rough handling and crushed limbs cause untold suffering to the dogs.”

“The method by which they are slaughtered varies, but usually the dogs are beaten to death with a metal pipe in front of others and then bleed to death through a cut in the throat or groin,” he said.

“When you visit a dog or cat slaughterhouse, you meet traumatized dogs who have witnessed the killing of their cage mates and know for sure that the same thing will happen to them. It’s a very harrowing experience.”

Traditional Chinese “medicine” also continues to decimate endangered species across the planet. The way they treat their fellow human beings is one horror spectacle. This must stop. Now.