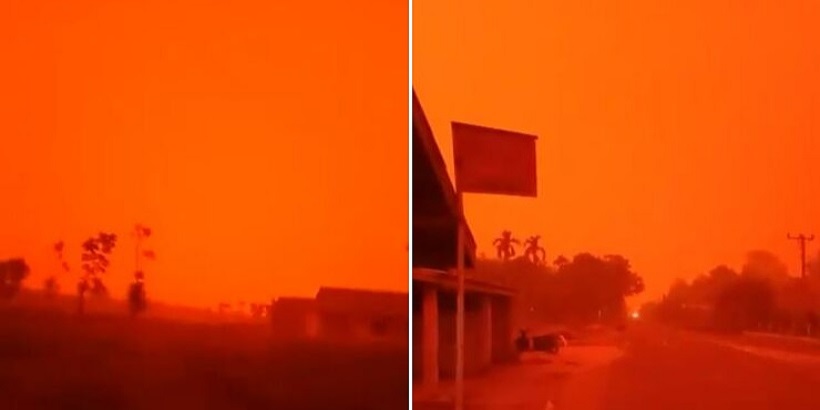 (TMU) — As the world continues to burn, from the Amazon rainforest to the frozen Arctic, we’ve become subject to a steady stream of apocalyptic imagery that is very far from normal.

But in all likelihood, this apocalyptic imagery be the “new normal” as increasing global temperatures and worsening climate conditions whip up ever more dangerous weather events.

And the latest horrific imagery coming from a province in Indonesia located near the country’s massive forest fires isn’t just frightening—it’s downright otherworldly.

In social media posts shared over the weekend, video and images depict the blood red skies of Jambi, a province in Central Sumatra, where a concentration of toxic haze has given the skies unearthly and Mars-like crimson tones.

The tweets have been accompanied by the hashtag #prayforjambi, along with appeals for the government to implement much stronger measures to finally put out the fires.

Mars? no, its jambi.

“This afternoon is not night. This is earth not mars planet. This is not in outer space. It’s us who breathe with lungs, not with gills. We humans need clean air, not smoke.”

This afternoon is not night. This is earth not mars planet. This is not in outer space. It's us who breathe with lungs, not with gills. We humans need clean air, not smoke.
Location: Kumpeh, Muaro Jambi #KabutAsap #KebakaranHutanMakinMenggila pic.twitter.com/WtEqPphgRT

In a separate post, user Duke of Condet notes:

“All we know about Planet Mars is the reddish planet, also it atmosphere. Well.. I don’t want you have some misunderstanding, so I’ll tell you before; THIS IS NOT MARS! This is Jambi @ Indonesia. The air somehow changed cuz of forest fire.”

All we know about Planet Mars is the reddish planet, also it atmosphere.

Well.. I don't want you have some misunderstanding, so I'll tell you before; THIS IS NOT MARS!

This is Jambi @ Indonesia. The air somehow changed cuz of forest fire.pic.twitter.com/3WhjcVx5Lc

As Coconuts Jakarta reports, the disturbing reason why the Jambi region is enveloped in red is due to the extreme concentration of smoke, according to Indonesia’s Meteorology Climatology and Geophysics Agency (BKMG).

“Other areas on the satellite look brown but in Muaro Jambi they look white, which indicates that the smoke layer is extremely thick. This is likely because of land / forest fires occurring in the area, especially on peatlands.”

Continuing, the official noted that the skies weren’t red simply because of high temperatures but because of a phenomenon known as Rayleigh scattering, which has to do with the types of particles present in the air during periods of haze.

“In the smoke haze, the most abundant particles are around 1 micrometer in size, but these particles do not change the colour of the light we see.

There are also smaller particles, around 0.05 micrometers or less, that don’t make up a lot of the haze but are still somewhat more abundant during a haze period [than a normal non-haze period]… but this is enough to give an extra tendency to scatter red light more in the forward and backward directions than blue light—and that is why would you see more red than blue.”

As is the case in South America, the fires are largely the result of illegal land clearance fires run amok. The slash-and-burn technique is practiced annually by big agribusiness and small-scale farmers eager to clear vegetation for palm oil, pulp and paper plantations.

But this year, the level of pollution and scale of the fires has reached such a deadly level that it has been filtering out some of the sun’s wavelengths, giving it the menacing color seen in the videos.

Not only the people of Indonesia but those in neighboring countries Malaysia, Singapore and Thailand—as well as their wildlife—have been forced to bear the brunt of the toxic air.

Many have blamed corruption and a failure of governance for allowing slash-and-burn techniques to open the door to the catastrophe engulfing Indonesia.