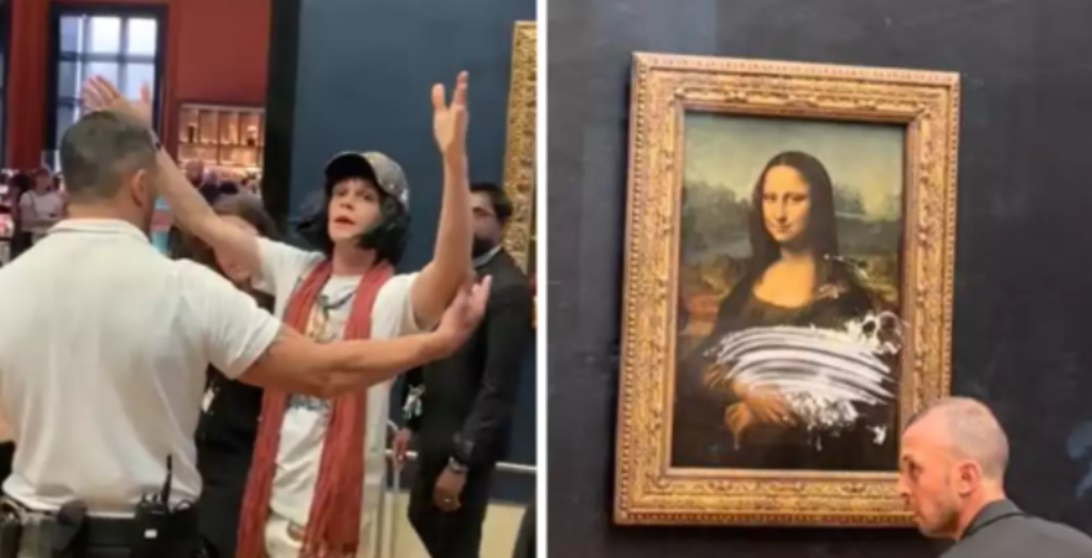 A guy, age 36, was taken into custody and put in mental treatment after he allegedly smeared cake on a glass screen that was housing the Mona Lisa in an act that was intended to be a protest against artists who do not concentrate enough on the planet.

The perpetrator, seen wearing a wig and lipstick, urged people to “think of the Earth” while being led from the scene.

The incident on Sunday was described by witnesses as being “jaw-dropping”.

The following is what the guy in the video says as he’s speaking French: “There are people who are destroying the Earth … All artists, think about the Earth. That’s why I did this. Think of the planet.”

As a result of the work’s enclosure in bulletproof glass, previous efforts at vandalism against the Leonardo da Vinci painting, which were unsuccessful in damaging the painting. According to The Guardian, representatives from the Louvre Museum refused to comment when asked about the strange occurrence.

Maybe this is just nuts to me💀but an man dressed as an old lady jumps out of a wheel chair and attempted to smash the bullet proof glass of the Mona Lisa. Then proceeds to smear cake on the glass, and throws roses everywhere all before being tackled by security. 😂??? pic.twitter.com/OFXdx9eWcM

Louvre visitor Luke Sundberg, from the US, saw it all unfold. “The crowd begin gasping and we looked up and some man in a wheelchair [dressed] as an old lady ran up to the painting and started punching it before smearing cake all over it,” the 20-year-old told the PA news agency.

“It took about 10 to 15 seconds for the security to actually take the man away, but the crowd seemed to panic a little bit.

“It was jaw-dropping, it was a lot to take in considering how historic Mona Lisa is… the moment was once in a million.”

‘Think of the earth’

The activist, who was also seen throwing roses in the gallery, was escorted out by security. “Think of the Earth,” he declared.

“There are people who are destroying the Earth. Think about it. Artists tell you: think of the Earth. That’s why I did this.”

A 36-year-old man was detained and sent to a police psychiatric unit, the Paris prosecutor’s office confirmed on Monday, adding it had started an investigation into the damage of cultural artefacts.

The Renaissance painting had glass installed in the 1950s to protect it after an acid attack.

A video from Mr Sundberg showed onlookers breaking into applause after the cream was cleaned from the glass.

Fellow museum visitor, Klevis, 26, from Albania questioned: “What were the odds this would happen?”

The Greatest Secrets Of The Mona Lisa

Mona Lisa, also known as La Gioconda, is the wife of Francesco del Giocondo. This painting is painted as oil on wood. The original painting size is 77 x 53 cm (30 x 20 7/8 in) and is owned by the Government of France and is on the wall in the Louvre in Paris, France.

This figure of a woman, dressed in the Florentine fashion of her day and seated in a visionary, mountainous landscape, is a remarkable instance of Leonardo’s sfumato technique of soft, heavily shaded modeling. The Mona Lisa’s enigmatic expression, which seems both alluring and aloof, has given the portrait universal fame.

The Mona Lisa’s famous smile represents the sitter in the same way that the juniper branches represent Ginevra Benci and the ermine represents Cecilia Gallerani in their portraits, in Washington and Krakow respectively. It is a visual representation of the idea of happiness suggested by the word “gioconda” in Italian. Leonardo made this notion of happiness the central motif of the portrait: it is this notion that makes the work such an ideal. The nature of the landscape also plays a role. The middle distance, on the same level as the sitter’s chest, is in warm colors. Men live in this space: there are a winding road and a bridge. This space represents the transition between the space of the sitter and the far distance, where the landscape becomes a wild and uninhabited space of rocks and water which stretches to the horizon, which Leonardo has cleverly drawn at the level of the sitter’s eyes.

The painting was among the first portraits to depict the sitter before an imaginary landscape and Leonardo was one of the first painters to use aerial perspective. The enigmatic woman is portrayed seated in what appears to be an open loggia with dark pillar bases on either side. Behind her, a vast landscape recedes to icy mountains. Winding paths and a distant bridge give only the slightest indications of human presence. The sensuous curves of the woman’s hair and clothing, created through sfumato, are echoed in the undulating imaginary valleys and rivers behind her. The blurred outlines, graceful figure, dramatic contrasts of light and dark, and overall feeling of calm are characteristic of da Vinci’s style. Due to the expressive synthesis that da Vinci achieved between sitter and landscape, it is arguable whether Mona Lisa should be considered as a traditional portrait, for it represents an ideal rather than a real woman. The sense of overall harmony achieved in the painting especially apparent in the sitter’s faint smile reflects the idea of a link connecting humanity and nature.

In the Renaissance which brought together all human activities, art meant science, art meant truth to life: Leonardo da Vinci was a great figure because he embodied the epic endeavor of Italian art to conquer universal values: he who combined within himself the fluctuating sensitivity of the artist and the deep wisdom of the scientist, he, the poet and the master.

1. She lived with Francois I, Louis XIV and Napoleon

Although da Vinci began work on his masterpiece while living in his native Italy, he did not finish it until he moved to France at King Francois I’s request. The French king displayed the painting in his Fontainebleau palace where it remained for a century. Louis XIV removed it to the grand Palace of Versailles. At the outset of the 19th century, Napoleon Bonaparte kept the painting in his boudoir.

2. Some historians believe Mona Lisa is a Self-Portrait of Leonardo da Vinci.

Leonardo da Vinci died in 1519, and he is buried at a French castle. Italy’s National Committee for Cultural Heritage is undertaking an investigation, and plans to dig up his skull. They want to rebuild Leonardo’s face, using CSI-style technology. Will he resemble the mysterious Mona Lisa?

3. She has her own room in the Louvre Museum in Paris.

After the Louvre launched a four-year, $6.3 million renovation in 2003, the painting now has its own room. A glass ceiling lets in natural light, a shatter-proof glass display case maintains a controlled temperature of 43 degrees F. and a little spotlight brings out the true colors of da Vinci’s original paints.

4. It is a painting but not a canvas.

Da Vinci’s famous masterpiece is painted on a poplar plank. Considering he was accustomed to painting larger works on wet plaster, a wood plank does not seem that outlandish. Canvas was available to artists since the 14th century, but many Renaissance masters preferred wood as a basis for their small artworks.

5. Jackie Kennedy invited her to visit.

Over the centuries, French officials have only rarely let the painting out of their sight. However, when first lady Jackie Kennedy asked if the painting could visit the U.S., French President de Gaulle agreed. “Mona Lisa” went on display at the National Gallery of Art in Washington D.C. and then at the Metropolitan Museum of the Arts in New York City.

6. A thief made her famous.

Although in the art world, the painting had always been an acknowledged masterpiece, it wasn’t until it was stolen in the summer of 1911 that it would capture the attention of the general public. Newspapers spread the story of the crime worldwide. When the painting finally returned to the Louvre two years later, practically the whole world was cheering.

7. Picasso was under suspicion for the theft. During the investigation, the gendarmes went so far as to question known art dissidents such as Pablo Picasso about the theft. They briefly arrested poet Guillaume Apollinaire, who had once said the painting should be burned. Their suspicions proved to be unfounded.

Since the painting first arrived at the Louvre in 1815, “Mona Lisa” has received plenty of love letters and flowers from admirers. She even has her own mailbox.

Various vandals have tried to harm da Vinci’s famed masterpiece, and 1956 was a particularly bad year. In two separate attacks, one person threw acid at the painting, and another individual pelted it with a rock. The damage is faint but still noticeable. The addition of bulletproof glass repelled subsequent attacks with spray paint in 1974 and a coffee cup in 2009.

Truly priceless, the painting cannot be bought or sold according to French heritage law. As part of the Louvre collection, “Mona Lisa” belongs to the public, and by popular agreement, their hearts belong to her.