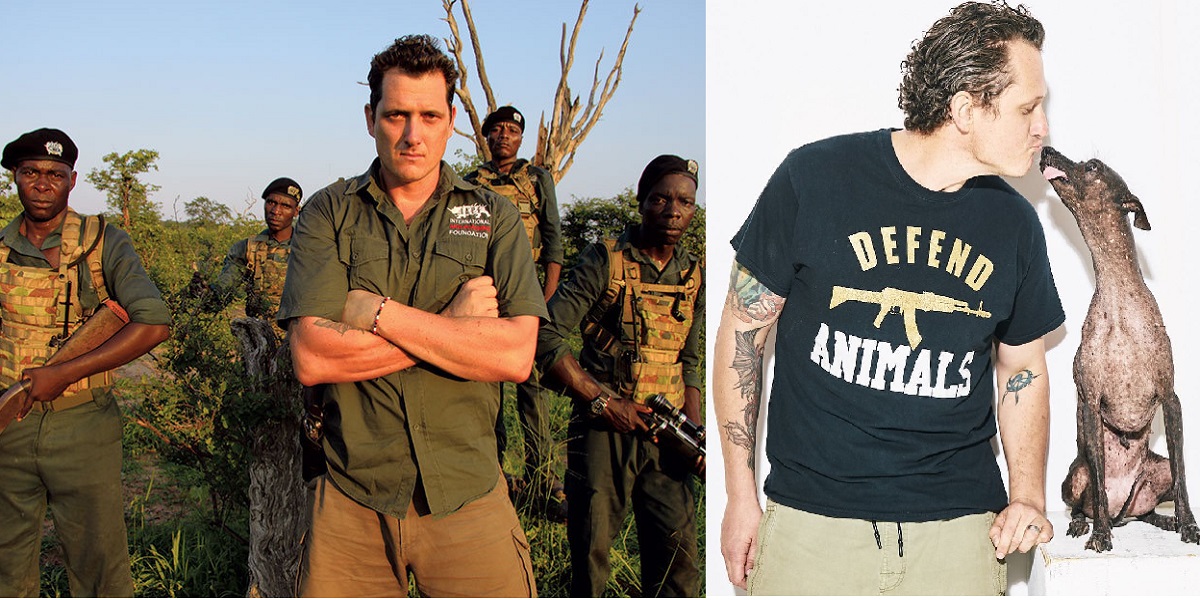 Damian Mander, an Australian combat veteran choose an unlikely career path after returning from his tour from the Middle East. With a variety of options in front of him, the former special ops soldier devoted his life and his training to help defenceless animals instead.

Mander, who spent time in the Tactical Assault Group-East (TAG-E)—a direct action and hostage recovery unit—before heading to Iraq, as well as serving as a special operations sniper in the Australian Army’s Special Forces 2nd Commando Regiment, opted away from a life of leisurely retirement after duty and visited Africa instead.

The toughest journeys are the least pursued ones, but they are the most rewarding. A comfortable life is a dangerous life, and I highly advise against it. Out there, amongst it all, awaits an unbiased and blank canvas. A path that is yet to be carved. A life that is yet to be lived. A story waiting to be written. To walk a beaten track is to follow in familiar footsteps. At some point, if you want to search for something undiscovered, that safe, easy to follow path has to be abandoned. And then shit gets real. Then life really starts. – – Many grey hairs ago… In a galaxy far, far away, September 11 changed the world for a lot of people. It changed the world for me. As a response, the Australian government formed Tactical Assault Group-East (TAG-E). A special operations, direct action and hostage recovery unit. After enduring the mental torture of selection, I came across to TAG-E from the Navy into Water Platoon. I’d been there only two days before being told I was being sent to sniper school. Talk about a fish (Navy Diver) out of water. The Army lads beat me into shape pretty quickly in what I’d say would be the most extreme learning curve I’ve ever encountered.- – Special operations gave me the qualifications I needed to head to Iraq as a private contractor. Iraq gave me the money, life lessons and desperation needed to set up the IAPF. IAPF gave me the purpose I needed to be all I could dream to be in life. – – We all have a path waiting to be carved. And no one will do it for us. If they try – run. Only you can cut your own path. Anything handed to you is a disservice. – – #ClearanceDiver #IAPF #AntiPoaching #Purpose #Vegan #PlantBased #Nature #Sniper #SpecialOperations #Dream #Animals

For six months, Mander experienced the front lines of the illegal world of animal poaching. The journey through Botswana, Namibia, South Africa, Zambia, and Zimbabwe changed Mander’s life forever. From then on in, Mander promised to protect the wild animals that had no means of protecting themselves.

“After Iraq I was looking for the next adventure and [a trip to Africa] just seemed like it was going to be a six-month thing to do. When I travelled around the continent, I was inspired by the work that the rangers were doing,’ Mander said in an interview with LAD Bible.

“They have something really worthwhile fighting for: giving up everything, being away from their family for so long each year defending the natural world. I had just come from Iraq where we were looking after dotted lines on a map and resources in the ground and it made me reflect on who I was as a person.”

Damian Mander, who had a valuable property portfolio back home, sold it off to fund his new project, the International Anti-Poaching Foundation (IAPF). The funds also helped to finance a ranger training academy in Victoria Falls, Zimbabwe.

Earlier this year, Matt Shapira's beautiful artwork and generosity helped raise many yearly salaries for new recruits! Matt's elephant painting on a vintage map made it all the way to Zimbabwe, thanks to Erin Haley. She attended a fundraising event in Colorado hosted by Next Wave Impact and was outbid on one of Matt’s paintings. Afterwards, she got in touch with us to ask if she could commission a painting with her donation. Matt agreed. When it was ready to be shipped, she decided to gift it to the rangers as a token of appreciation for doing one of the hardest jobs there is: saving the natural world. The painting will be hanging in the new ops center being built as we speak. One of our goals is to create a reality in which elephants are treated as carefully as one of these century year-old vintage maps. Elephants, like any species, should be allowed to live out their lives as they wish, to their fullest extent. IAPF is hard at work, making this a reality for more and more wildlife each day. Happy World Elephant Day! #IAPF #Akashinga #WorldElephantDay #talesleftunsaid #elephants #africanelephant #trunksup #elephantlovers #jointheherd #conservation #savetheelephants #saynotopoaching #elephantlove #wildlifeconservation #endwildlifecrime #thisisafrica #bekindtoelephants #saveelephants #worthmorealive #stoppoaching @roaming__elephant @africanveganonabudget @damien_mander @kellyhazelking

His expertise is now used to train rangers in covert tracking, conducting ambushes, arresting poachers and preserving crime scenes. Mander also uses his military skills to win over hostile locals and educate them.

“Beyond the guns and ammo are the lessons I learned in Iraq that have really been the biggest benefit to what we do.

The ability to get the local population on side, get the hearts and minds, that’s more important than anything else and it’s something that we completely failed at in Iraq. We’re able to take those failures from Iraq and turn them into a positive.”

FIELD REPORT: Recently the International Anti-Poaching Foundation’s (IAPF) Akashinga rangers intercepted a team of three suspected poachers entering Zimbabwe’s World Heritage Listed Mana Pools National Park armed with cyanide, axes and knives. Further information passed to the Akashinga team resulted in a joint operation with the Minerals Flora & Fauna Unit (MFFU) of the Zimbabwe Republic Police (ZRP), netting the arrest of a fourth suspect who allegedly supplied the cyanide to the would be poachers. Cyanide is sometimes used to kill elephants and other wildlife without force as it is cheap and quiet to use. It is placed near watering holes, on oranges or rock salt where the unsuspecting animals will be baited. The suspect being implicated of supplying the cyanide works in Mberengwa’s mining industry. Miners use cyanide concentrate during the separation process of gold from bulk ores. It exists in two forms, gas and crystal (see small white ‘balloons’ confiscated in photo above). This inhumane method of poaching works quickly, as cyanide cuts off the oxygen supply. Cyanide use in poaching is an ongoing problem in Zimbabwe so these types of arrests are a significant ‘win’ for wildlife. Cyanide is easily obtained illegally, so monitoring and protecting these areas remains a vigilant task. The suspects will appear in Kariba Magistrates Court. Thank you to all those involved in this operation. To support our continued work, please follow link in bio. #IAPF #Akashinga #antipoaching #rangers #wildlife #conservation #zimparks #racingextinction #savetheelephants #elephants #womenempowerment #womenwholead #africa #socialmovements #illegalwildlifetrade #stopivorytrade

In Victoria Falls, all poaching attacks were halted thanks to the IAPF’s efforts, and since its establishment, the Kruger National Park in South Africa has seen a 90 percent drop in rhino poaching activities. In 2016, the rate of poaching had dropped for the first time in a decade.

“The rate of incursions of poachers into Kruger National Park, about 75 per cent of those were attributed as coming from Mozambique into Kruger and with the operations established on that side of the border, that dropped to around 30 per cent, Mander said.

Pictured is Tracey. Today in Karoi Zimbabwe, she was part of a joint operation with Police Criminal Investigations Department, Border CID, National Parks Investigations and IAPF's Akashinga female rangers which led to the arrest of a fugitive ivory poacher implicated with the use of cyanide to conduct his killings. One set of tusks was recovered. Well done all involved. Great teamwork as we continue help to drive wildlife crime out of the Lower Zambezi Valley @int.anti.poaching.foundation We can only continue with your support: http://donate.iapf.org Thanks to my good mate and photographer @adriansteirn for the pics.

But it wasn’t all easy, with locals violently challenging the organization.

“We had helicopters, drones, canine attack teams, military grade hardware [but] we had this ongoing conflict with the local population and while we might have won that battle overall, what we were doing was not sustainable.

We were saving rhinos and we were having a war with the local population on a continent that is going to have two billion people on it by 2040.”

Nice shot of a leopard tortoise!

This challenge was confronted by integrating female rangers into the IAPF team. Now, the women, many of them victims of violence and sexual assault, are the strongest elite force within the foundation. As it stands, the female elite forces have conducted 140 successful arrests.

“We sit here talking about different species going extinct, but the reality is if we don’t look after this one beautiful backyard we’ve been given it’s not the elephant or the rhino that’s going extinct: it’ll be us.

We need to decide if we want to be part of the future and if we do, we need to make changes.”