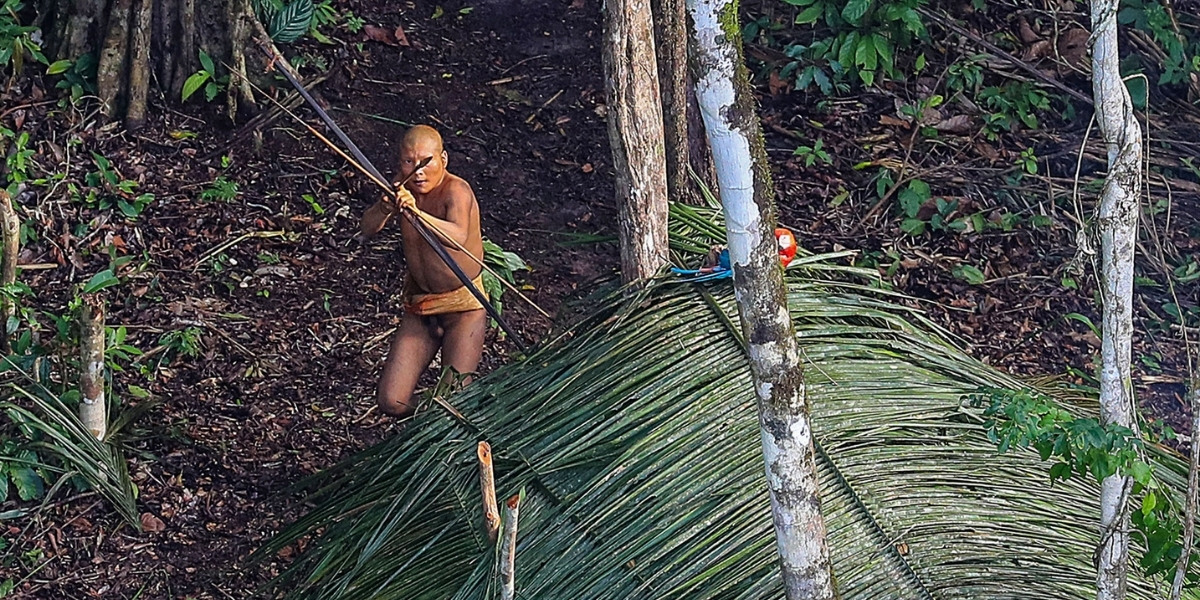 It’s incomprehensible for many to imagine a world in which Mac computers, Starbucks lattes, and daily commutes to and from work aren’t the norm. For a handful of communities around the globe, however, simple uninhibited living is all that’s known.

Fortunately, a series of recently captured images taken by Ricardo Stuckert can help make sense of this reality. National Geographic reports that when the Brazilian photographer had his helicopter diverted due to a storm, the detour led to him documenting a remote rain forest tribe.

The tribe was photographed in Brazil’s state of Acre, near the Peruvian border. Each high-resolution image depicts the forest and its inhabitants, who are equipped with nothing more than simple clothing, body paint, and weapons. One man even threw a spear at the helicopter.

What’s intriguing about this remote tribe is that none are aware of the advancements of modern civilization. Stuckert held similar sentiment.

“I FELT LIKE I WAS A PAINTER IN THE LAST CENTURY,” HE RECALLED. “TO THINK THAT IN THE 21ST CENTURY, THERE ARE STILL PEOPLE WHO HAVE NO CONTACT WITH CIVILIZATION, LIVING LIKE THEIR ANCESTORS DID 20,000 YEARS AGO—IT’S A POWERFUL EMOTION.”

Some experts believe that the indigenous tribe is the same that gained global attention over eight years ago when photos surfaced of tribesmen launching arrows at a low-flying plane. Reportedly, they move around every four years ago.

According to Stuckert, the tribe’s initial panic faded into curiosity as the helicopter returned a few hours later for another look. He told National Geographic:

“THEY SEEMED MORE INQUISITIVE THAN FEARFUL. I FELT THERE WAS A MUTUAL CURIOSITY, ON THEIR PART AND MINE.” Their haircuts vary, but most wear simple clothing, are covered in body paint, and embrace weapons. “To think that in the 21st century, there are still people who have no contact with civilization, living like their ancestors did 20,000 years ago—it’s a powerful emotion.” “They’re messages. Those arrows mean ‘Leave us in peace. Do not disturb’.”