Anyone who has ever seen 101 Dalmatians knows you just shouldn’t mess with dogs, full stop.

Not only are they hairy angels on Earth who deserve lives of endless petting and treats, they will also work together to make you look very silly indeed.

One man who clearly has never seen the bit where Cruella de Vil lands on her face in manure has since paid dearly for his ignorance. And his humiliation is extremely satisfying.

The footage shows the foolish human running across a beach towards a stray dog, with the perplexingly pointless intention of kicking it. 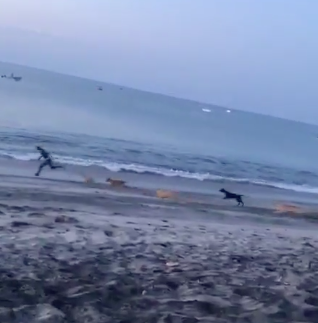 The dog – which appeared to have been minding its own business – leapt out of the way and the man tripped cartoonishly to the sand mid kick.

As he struggled to his feet, another half dozen dogs rushed into view like a team of adorable superheroes.

Like many bullies before him, the man thought he had found an easy target in the stray dog. Little did he know how how many friends were chilling nearby, ready to cover their buddy’s furry back.

The tables quickly turned in the dog’s favour, and suddenly he was the one running after the suddenly worried man; joined by all his loyal doggy mates.

The squad chase the frightened man into the sea where he slipped and floundered around in the shallows, outwitted by the very creatures he thought he had the right to kick.

At this point, the dogs appeared to leave him well alone, triumphant and tail-wagging in the knowledge of their victory. Never has the insulting phrase ‘get in the sea’ been so apt…

Check out the scenes for yourself below:

The footage was uploaded to Reddit, by user u/definetelytrue, and quickly went viral.

Plenty of people were greatly amused by this real ‘underdog’ story, viewing the man’s soggy punishment as ‘karma’.

I love how the first dog dodges him then starts to back off until he sees his crew rolling in deep then turns around and starts chasing the guy like, ‘Yeah what now, b*tch!’ This is the same reaction most people would have too.

The dogs recognized that this man was behaving irrationally, which he absolutely was, and that’s why they all turned on him to put him in his place. Dogs are smarter than a lot of humans I’ve realized.

However, others showed more sympathy for the chased man, reasoning how we don’t know the full story behind the attempted kick.

We only see a small portion of the clip, it could be that the dog had just gotten done chasing him and his friend across the beach threatening to attack, it could also very well be that he’s just a stupid a*shole.

Are we sure he was actually trying to kick it and not chase it off or something? Could also have been trying to catch it and just dropped to his butt when he realized he couldn’t. 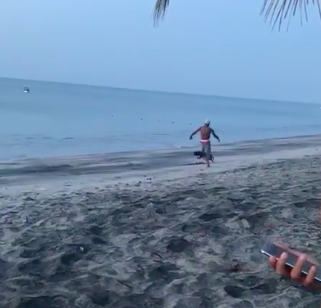 Hopefully next time this man sees a dog relaxing on the beach, he will leave it well alone or maybe even offer it a guilt ridden biscuit or two.