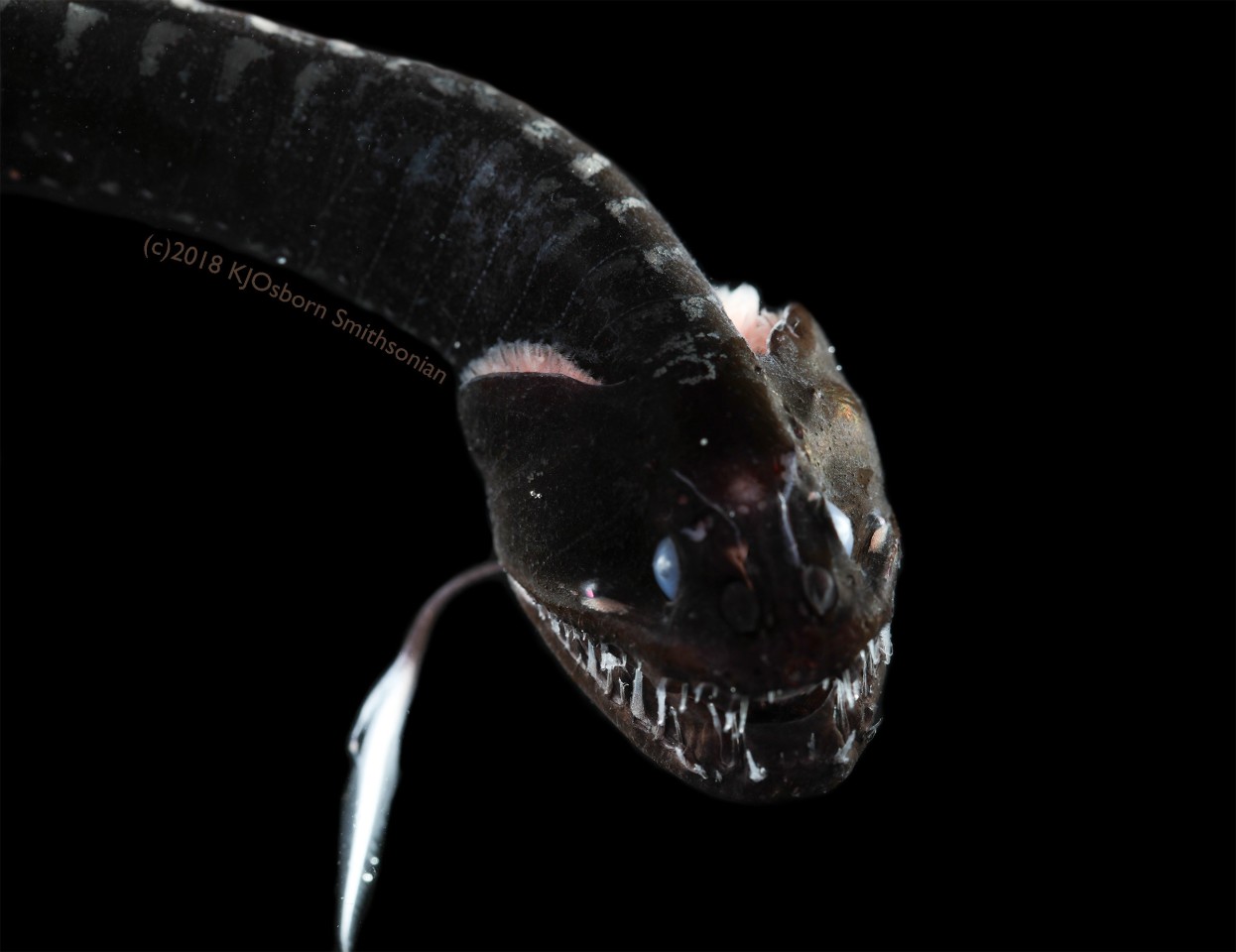 As if 2020 can’t get any weirder and wilder. Now scientists have discovered a deep-sea creature so ultra-black that it is being compared to a black hole.

The recent discovery of 16 new deep-sea species made by marine biologists Karen Osborn and Alexander Davis has rocked the marine biology world. The creatures’ ultra-black skin is being compared to a natural “Vantablack,” which is a manufactured material capable of absorbing all light. The newly discovered ‘fangtooth’ species, along with its friends, who live as low as 2,000 meters beneath the sea, appear to have kept their dark-skinned trait to themselves over evolutionary time—making Osborn and Davis’ discovery when classifying creatures during a photo shoot even more astonishing.

Osborne’s custom-built strobe lights and a mounted camera helped capture the rare species. Osborne described the challenge as a fish devouring light as though it were a living black hole. “I was trying to take pictures of it, and I was just getting these silhouettes,” Osborn says. “They were terrible.”

“What isn’t absorbed side-scatters into the layer, and it’s absorbed by the neighbouring pigments that are all packed right up close to it,” Osborn said.

The fangtooth, with its full mouth of sharp, pointy teeth attached to a snout and tear-dropped body, is more akin to a creature out of a sci-fi movie than reality. The ultra-black skin contains organelles or melanosomes, which absorb most light photons. The newly discovered species, according to researchers, can absorb 99.956 percent of all light that hits them.

Duke University marine biologist Alexander Davis described their findings in a paper published in Current Biology as “the first case we have of something this black really being used as camouflage as well.”

One theory of why these sea creatures would need to disguise themselves so deep in the oceans is that the sea is aglow with bioluminescence light that attracts predators. By casting shadow, the ultra-black sea creatures can escape predators and sneak up within closer range of prey easier.

“Obviously, you don’t want your prey to see that light casting all over your face,” says Davis. “So if your head is now ultra-black, none of that light goes back to the prey, and you’re more likely to get within range.”

Osborn explains further how some fish have developed ultra-black stomach linings to further conceal their locations.

“[The prey is] either going to be startled and bioluminescent when it’s in your belly because it’s freaking out, or as you digest it, those chemicals are going to release and start bioluminescing,” says Osborn. “You don’t want to be swimming around with a glowing belly, right? That’s just asking for trouble.”

While the development of these highly efficient survival mechanisms is intriguing, marine biologists are uncertain whether they can reproduce this phenomenon in a lab. It is foreseeable that the physical mechanism could become commercialized one day in the form of much thinner, more durable and less expensive materials.